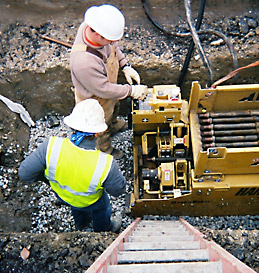 One of the major requirements in replacing the water-main was that disruption to the daily workings of the university should be minimized, both in terms of keeping classes open during the work and maintaining use of the facility’s crowded car park. This is no mean feat given the number of students involved and the continual traffic to and from the university site both in terms of people and vehicles.

Having investigated thoroughly both the site and its limitations, the contractor decided that the best solution to the pipe replacement problem would involve the use of trenchless technology. Having investigated the available options, Master Construction decided that pipe-bursting was likely to offer the most effective solution. This was because it offered the ability to replace the deteriorated pipeline with minimal disruption to the university and has the facility to maintain current easements and accesses.

Having completed earlier repairs on the same pipeline, Master Construction had a pretty good idea of what to expect in terms of ground conditions. Effectively the ground conditions across the installation site comprised grey clay.

The existing pipeline, comprising a 150 mm diameter, cast-iron pipe, was positioned within a utility tunnel. It was decided that the new replacement water pipe would be made up of a fusible PVC material. This enabled the installation to be completed through the existing utility tunnel with no further modification to the site being necessary.

While for many years butt welded PE has been a popular material for this type of installation in many parts of the world, its acceptance in some parts of North America has been less dramatic. The development of a fusible PVC pipe material by Underground Solutions has now enabled the more widely accepted PVC material to be utilized in both HDD and, as in this case, pipe-bursting work within the US markets.

The fused joints of the PVC pipe have been tested and shown to be as strong as the original pipe material. This enables the pipe to be installed under tension without fear of the joints separating during any pulling operation, as is typically required in the particular trenchless installation technique used at MSUM.

To complete the pipe-bursting operation itself, Master Construction decided to utilize a HammerHead manufactured, HydroBurst HB80 pipe-bursting rig. The unit was fitted with a 150 mm ductile splitter bursting head which provides the forces and cutting action necessary to break up the existing pipe in the ground. The splitter head was followed by an expander to push the old pipe shards into the surrounding ground and open the void created by the old pipe up to a size that was able to accept the new, larger diameter PVC pipe with relative ease.

The HydroBurst HB80 bursting rig is one of the more recent additions to the HammerHead portfolio of bursting machines. It has been strategically designed for the contractor that is looking for a reliable and simple-to-operate machine that can be towed on a 5.5 t trailer using a 1 t truck. The rig design means it has the capacity to complete some 85% of the pipe-bursting projects now being bid in the buried service construction market, including both water and sewer works.

Given its low weight of just 1,270 kg (for the rod-pulling bursting unit), the HB80 is very easy to transport both to and around the job site. Designed for high productivity, it includes useful features such as an auto rod spinner, a fast shuttle speed feed (16 second) for each 900 mm rod, a light weight rod, and 45 m of on-board rod storage to provide a two-hour calculated round trip for a 122 m burst. To maximize job performance, the HB80 bursting rig is coupled with a locked and sound proofed 73 hp Kubota-driven power supply. The power pack has a 155 l/min variable displacement hydraulic pump for maximum pulling power and cylinder shuttle speed.

The HB80 unit also features a rod lock vice, which holds the rod in place for constant tension on the pipe string and shoring during installation, so increasing overall production; an optional Auto Rod Spinner which can quickly connect rods together to form a uniform pipe string; light weight rods, at just 12.2 kg each, with proven API style threads and which have been heat treated for durability and include an upset OD feature for rod lock and positive grip; and on-board burst head docking which reduces launch pit length requirements on operations using up to 300 mm-diameter pipe.

In total, the project to replace the deteriorated water pipe on the MSUM site comprised the installation of three individual replacement lengths, using three bursting rig set-ups. This enabled some 244 m of cast iron pipeline to be replaced with the fusible PVC pipe.

Work started on-site on October 23, 2006 and finished just three days later. The first bursting run comprised the replacement of some 48 m of pipeline. It took just two-and-a-half hours to complete the replacement run, including equipment setup and initial feed out of rods through the existing pipe, the pull-back for the bursting run and the new pipe installation itself.

During the course of the work, the crowded nature of the MSUM parking area necessitated the occasional use of a tow truck to rearrange the parked cars in order to access the required set-up positions and pipe pits. By obtaining permission for this within the parking area that formed much of the working site, Master Construction was able to complete the whole project without once shutting the parking area or access to the university.

Commenting on the project from the equipment manufacturer and dealership viewpoint, Nate Hrabosky of HammerHead said, “While this was a fairly typical pipe bursting project as far as pipe sizes and installation lengths were concerned, we were very excited to be working with the pipe supplier, Underground Solutions, and its fusible PVC pipe product. It was a great pipe to work with and it is now opening doors to communities and clients that had previously objected to pipe-bursting as a replacement technology due to fears about HDPE pipes being installed in their water networks. It is a major step forward for pipe-bursting technology in the USA.”

In addition, Jon Markle of the local area HammerHead equipment dealership, said: “This was our first job using the fusible PVC pipe. We found it to be an excellent product and the HB80 bursting unit worked with it flawlessly.”

For the client, Gordie Bergman, Minnesota State University Roads and Ground Maintenance Supervisor said: “We were very satisfied with the outcome of the pipe-bursting job. Master Construction was in and out of the site completely in just five working days. The HydroBurst system and their working procedures meant that there was very minimal disruption to the workings of MSUM, its students and the facility’s parking arrangements. The entire process ran very smoothly from start to finish.”