One of seven energy-distribution companies of NiSource Inc., with roots tracing back more than 125 years, Columbia Gas of Pennsylvania’s distribution lines today serve over 426,000 residential, industrial and government customers in 450 communities of 26 counties throughout Pennsylvania's greater York and Western Pennsylvania service territories. The company’s impeccable track record for providing energy over such a long period of time makes it easy to take the steady, reliable and safe flow of natural gas for granted. Given the age of the company, consider the vast distribution and service infrastructure as a continuous state of renewal. It’s a remarkable yet uncelebrated achievement of one of America’s longest running natural gas providers.

The same is true of the time-proven tools and techniques used to unobtrusively maintain the lines that bring their gas to them. One that Columbia Gas has been investigating for use in scheduled pipe replacement is an ingeniously simple strategy called the pipe slitting method. The pipe slitting method allows in-place pipe replacement without having to dig it up. Even those who’ve heard of the technique are amazed the first time they see it in action.

Dustin Hagg, a field operations leader for Columbia Gas of Pennsylvania, had known about the pipe bursting method of gas line replacement since he first entered the gas utilities industry more than 20 years ago. But it wasn’t until a tradeshow in 2014 that John Hrabosky of HammerHead® Trenchless, a Charles Machine Works company, gave him a personal introduction to the technology. The meeting inspired Hagg to look for “just the right job,” to demonstrate the pipe slitting technique for Columbia Gas project engineers.

Hagg said he primarily leads “direct-bury and insert operations.” These methods replace steel gas lines by either digging up the old pipe to replace it with new or installing new pipe in an offset parallel bore created by a horizontal-directional-drilling contractor. The pipe slitting method is an economically reliable alternative to both.

The method is a variation of the pipe bursting technique first developed in England as a trenchless alternative for replacing cast iron gas line pipe. A conical bursting head drawn through the pipe by pull rods or cable shatters brittle cast iron pipe, uniformly pressing the shards outward to make a smooth, clear pathway for the replacement pipe drawn behind it.

In the U.S., however, gas lines had been typically made of steel. Steel is not as easily burst with traditional pipe bursting tooling. In the early 2000s, HammerHead Trenchless was one of the first companies to pioneer a new version of the pipe bursting method using purpose-built tooling designed to slice deformable material like plastic pipe and even steel pipe rather than attempt to shatter it. 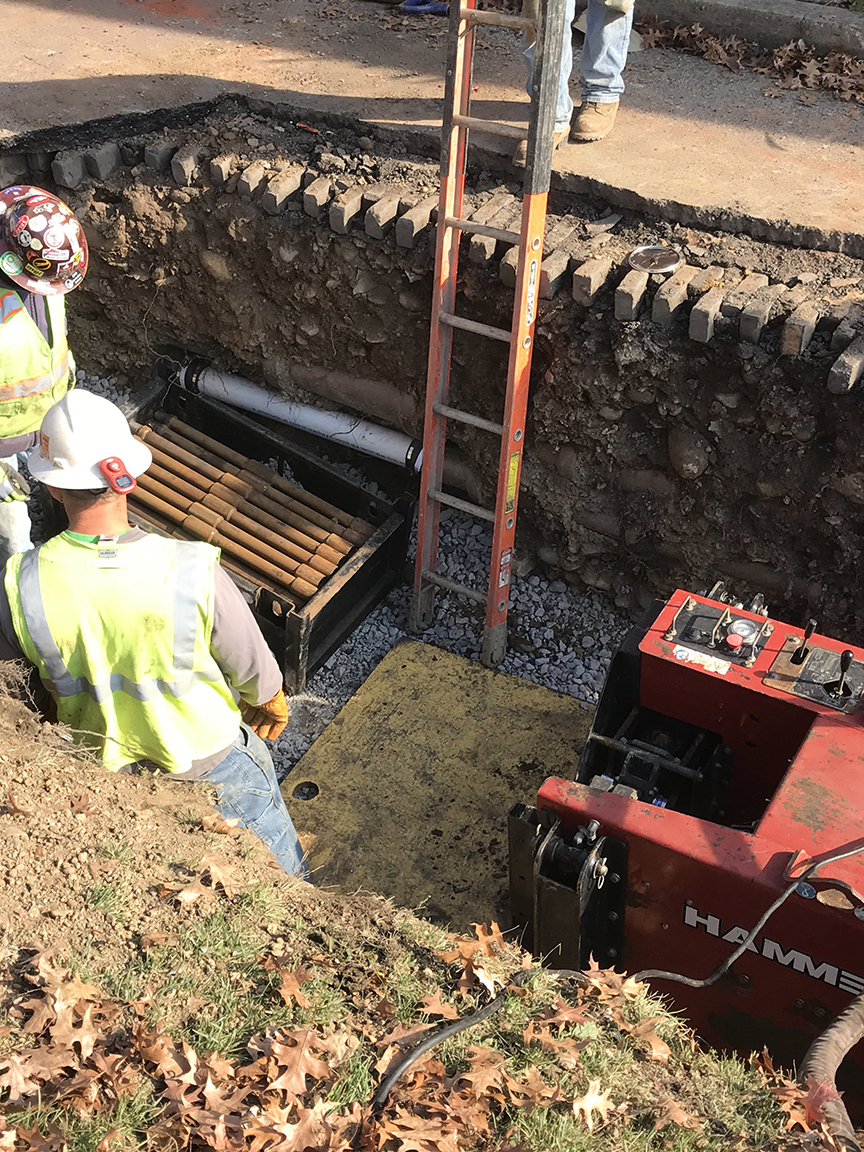 HammerHead Trenchless called this variation of the pipe bursting method “pipe slitting,” part of its Same Path™ technologies product line, whose name comes from one of its most obvious advantages. Same Path tooling follows the “same path” as the existing line to be replaced while simultaneously installing new product pipe. As with all pipe bursting methods, the pipe slitting technique virtually eliminates any chance of interference with shared utilities. And because it replaces the existing pipe in situ, the technique does not exacerbate crowded conditions in narrow easements with multiple shared utilities. It also eliminates any extra steps sometimes required to decommission abandoned lines. “All other jobs call for us to purge the decommissioned line, fill the ends, and sometimes even grout or slurry it.”

The gas line at this location lay 3 feet below a 14-foot-wide paved alley in cobble and stone fill. The pavement consisted of an 8-inch cement base with multiple asphalt surfaces laid during the course of the pavement’s lifespan. The narrow easement contained a water main, a vitrified clay pipe sewer line, and phone utilities within conduit running parallel to the gas line to be replaced. The easement was too tight to install another gas line using HDD. Use of the pipe slitting method would avoid full-length trenching and restoration.

Columbia Gas had only one other option, Hagg said: open cut technique, removing the existing line and replacing it with another. “Obviously the pipe slitting method would be much quicker and would avoid all that surface demolition and restoration, making it far more economical.”

Hagg was meticulous in his measurements and preparation before consulting further with HammerHead Trenchless representative John Hrabosky: “I needed to know details about the process, any potential problems the site might create for it. I didn’t want surprises once the equipment arrived,” Hagg said.

Hagg said, “John checked it all out, quoted the cost to us, made shipping arrangements and arranged to have an operator on hand for operations.” HammerHead Trenchless’ responsiveness continued to impress Hagg throughout the project: “HammerHead was very committed to the work. They have good knowledge of all of its practical aspects, even working in the field. It was obvious they understood the gas utilities industry, down to its specific safety parameters.”

Hrabosky served as coordinator for the project, enlisting HammerHead field technician Mark Maxwell as machine operator and director of the pipe slitting operation. Maxwell has 31 years of experience in underground pipe work, many as a contractor himself. He has replaced many thousands of feet of steel pipe with the pipe slitting method during his career.

Prior to the day of the pipe slitting operation, in the block that the pipe replacement would be made, Columbia Gas excavated a 5 foot by 15 foot machine pit for the HYDROBURST to a depth of just over 5 feet at one end of the run. An entry pit of similar dimensions was excavated at the other end of the run. The alley of the second block was used to stage the fused up 480-foot length of 4-inch MDPE.

Maxwell also went to work on site the day before the pipe slitting operation, checking that all the equipment was set and ready to go. The morning of the pipe slitting operation, the crew made final preparations for the pull and was ready to begin shortly after 9 a.m. Maxwell paid out the pull rods from the HYDROBURST to the far end at the entry pit.

The 4-inch MDPE pipe was fused on to the Same Path slitting assembly’s pulling head. The three-wheel steel pipe slitter and pilot were ahead of the pulling head. A flex link enabled easy pinning of the assembly to the pull rod after the protective push point used during pay out was removed.

Immediately after connecting the assembly, Maxwell began pulling the slitting head through the pipe with 480-feet of pipe following behind it. Hagg said, “It really is just amazing to see it in person. You hear it slices right through the pipe like it’s nothing.”

Maxwell continued the pull until he noticed a sudden change in pressure and motion from the downhole pulling unit. He stopped operations immediately. “I constantly monitor the gauges, since I am logging data as it goes. I saw it. But I always felt it. Like I always tell guys I’m training – that machine is capable of over 100 tons of force. When it’s running, either the pipe is coming to the machine or the machine is going to the pipe. There are some guys who’ve just tried to force it and actually deadheaded their machine against the wall.”

Maxwell knew from experience what had most likely happened. “The slitting head will easily go through steel pipe and just about any fitting or saddle that’s on it except one. It’s a notorious pipe slitting stopper, an incredibly thick-gauged, dual-wall compression fitting with big flanges and bolts.”

When the Columbia Gas crew saw-cut the pavement and key-holed down to the slitting head, they discovered exactly what Maxwell had guessed: a bolted metal compression coupling. “When you find one, you know there’s another one coming,” Maxwell said. “You just don’t know how far along it will be.”

The Columbia Gas crew quickly exposed the coupling and sliced its top open with a carbide saw. Removing it was not required, as the slitter would spread it open without problem. Maxwell continued the pull, “rocking and rolling,” until he saw the pressure spike and immediately ceased slitting operations again just 20 feet from the first coupling. Again the Columbia Gas crew exposed and cut the coupling. 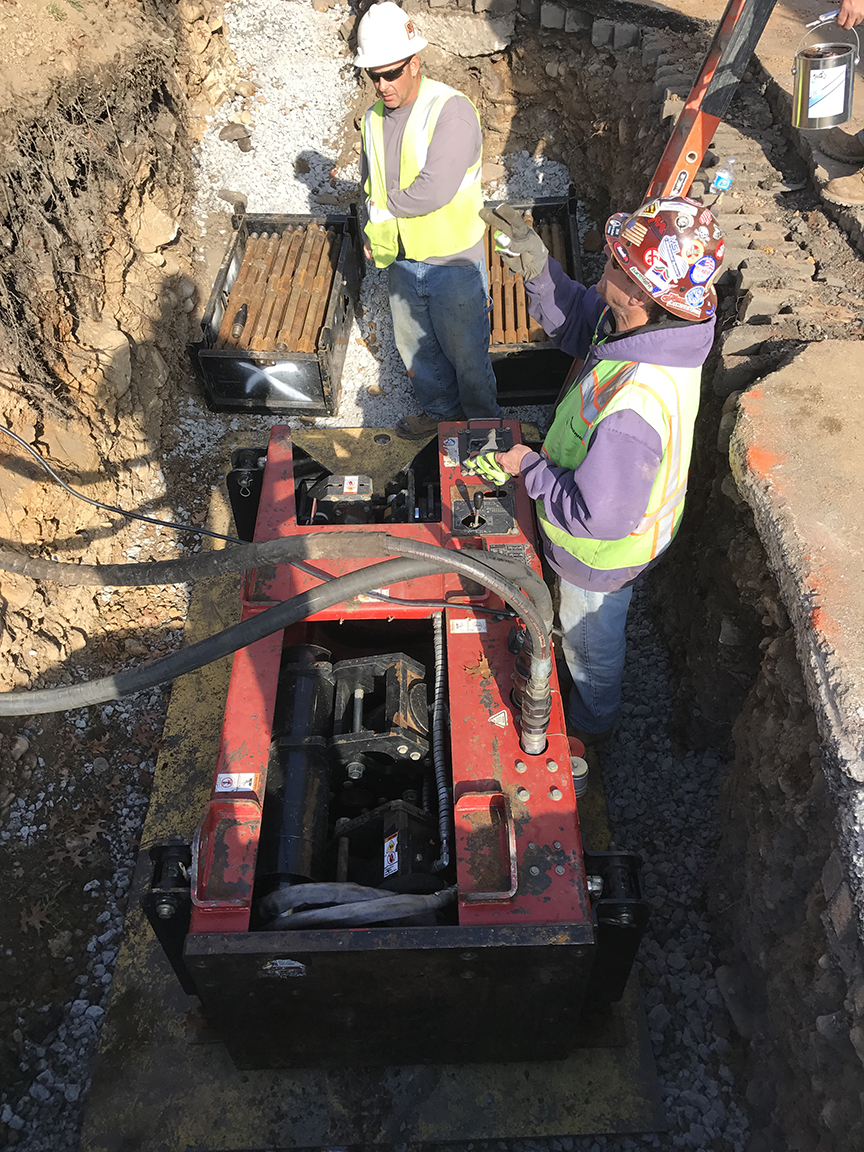 Maxwell completed the pull with no further issues. “The two couplings probably only cost us a couple hours.” Since rod is put back in its crate as the pull progresses toward the machine, the downhole unit can be unhooked from its hydraulics and lifted from the pit as soon as the new product pipe is in place. Maxwell was done with his part of the job by 7 p.m.

The Columbia Gas crew went to work reconnecting services, finishing their work by 9 p.m. Hagg said, “It was a flawless job, completed in under 14 hours start to finish.” Hagg said it would have taken four to five days, by comparison, to perform an open-cut replacement in this alley, not including having to refill the entire trench, pour a new base course and repave the alley. The pipe slitting method had allowed them to pull in the pipe and reconnect three services in a single day.

The Columbia Gas engineering department now has an extra tool in its toolbox to use on future jobs. Hagg said, “We’ll definitely use HammerHead Trenchless again.” The majority of future work will be done by contractors experienced in pipe bursting method, he said, although it’s possible Columbia Gas’ own field technicians may be cross-trained to use the method on some jobs as well. 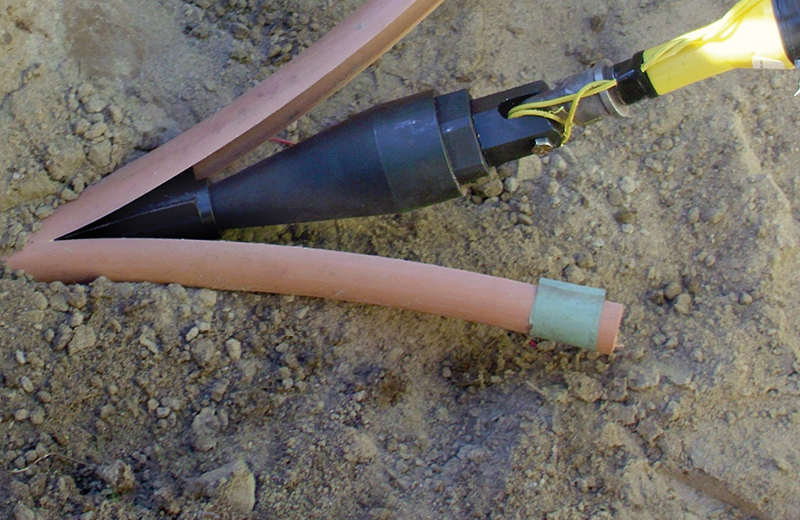