For returning North Carolina State University students, the only evidence that a 255-ft length of sewer pipe beneath their feet had been replaced two days earlier was a brand new manhole near Tomkins Hall.

Hidden as it was amid the trees and greenery of the school’s historic Court of North Carolina, and with the excitement of fall registration and festivities, it’s safe to say no one noticed. The golf-course-quality turf had been carefully replaced, as has the pavers in the walkways. Moffat Pipe Inc. had completed the pipe bursting job just in time for the fall semester, replacing 6-in. terra cotta pipe with 8-in. HDPE pipe. 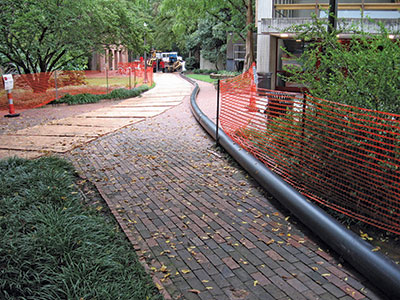 In addition to a tight deadline, Moffat had to negotiate some extraordinarily difficult restrictions. One was that tree roots of the historic landscaping enveloped the pipe along most of its length. Among the trees, lone survivors of the hurricane of 1996, is a venerable Chinese Evergreen Oak whose trunk stands only 4 ft off the pipe’s path. The tree is one of only two on campus, both bearing placards that give their individual identification numbers and their scientific name, “quercus myrsinifolia.”

Students are warned not to harm so much as a twig of this tree. Yet Moffat successfully pulled the 8-in. replacement pipe behind a 7-in. HammerHead pneumatic hammer right through the network of roots. The 11.5-in. diameter bursting head chosen for the project fragmented the existing 6-in. pipe down its length, pressing the remnants to the sides of the hole. Craig Moffat, one of Moffat Pipe’s owners, said at one point, as they were going through the root system of the trees, the hammer progress was excruciatingly slow. “I was a little nervous it was not going to make it,” he said.

But the burst was completed without hurting either the oak or any other tree–even one growing directly on top of the pipe’s path.

More than 80 years old, the clay sewer had several known leaks. The pipe suffered from root intrusion and was one size below today’s specification for 8-in. diameter pipe in this application. Simply sleeving the 6-in. pipe was not an option due the condition of the clay pipe and the need to maintain flow capacity.

Brandon Sykes, division manager of engineering for Hydrostructures Inc., who designed the project, said pipe bursting was the only technique that could be used for this project, given the historic value of this location. Open trenching would have killed the trees and scarred the famous aesthetics of the courtyard. Augering or horizontal directional boring would have been nearly as destructive.

Incidentally, Sykes said, though any project undertaken here would be expensive, pipe bursting was not only least intrusive but also least costly. And only pipe bursting could increase the sewer pipe diameter to code without more excavation.

The City of Raleigh entrusted the delicate, high-profile job to Moffat Pipe based on the company’s consistent performance as a specialist in completing other municipal installation and replacement contracts. Moffat Pipe knows HammerHead Trenchless Equipment well, owning static pipe bursting equipment for 4- to 6-in. lateral replacement jobs. So Moffat consulted with HammerHead to rent equipment suited to the NCSU job’s special requirements.

Brian Cowles, Southeastern U.S. sales manager for HammerHead, recommended pneumatic pipe bursting rather than static technique for this job, setting Moffat Pipe up with its 7-in. reversible hammer and an 8-in. DIPS burst head. To complete the bursting system, Cowles matched the hammer and head to a HydroGuide HG12 winch.

In a pneumatic pipe bursting setup, a winch is generally used to keep a steady, guiding pull on the burst head, as well as to counteract the increasing drag as more and more replacement pipe is pulled through behind it. Although the HG12 is capable of maintaining up to 12 tons of pull, less than 5 tons were needed at any time during this project, and for the most part it ran steadily at 4. The hammer itself was powered by 375 cfm of compressed air set up to 110 psi on this job, Cowles said. 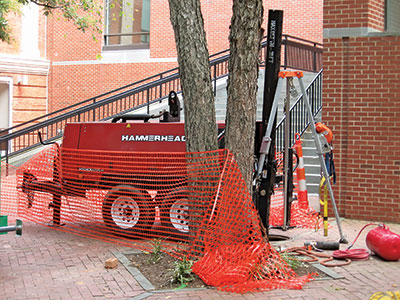 Moffat described the red clay surrounding the pipe as “a little hard but not too bad.” He explained that even though pipe had lain in the ground for decades, the clay originally used to fill in the pipe trench still accommodated expansion better than would the undisturbed soil beyond it. He would have the room for a good burst, yet it was not going to be a simple run.

HammerHead,The vacuum truck and air knife survey Hydrostructures Inc. conducted prior to designing the project visually verified the known complications. The knife uses high pressure air to form about an 8-in. diameter bore with little risk to any other utilities. The soil is vacuumed into the truck as it is removed. This potholing showed the current sewer pipe lay directly on top of a storm sewer and also passed above a steam tunnel. Nearer Tomkins Hall it lay immediately beneath a 12-in. water main. The main was well within the compression zone of the pipe burst and might be adversely affected by expansion during the burst.

Unable to guarantee the integrity of the aged water main pipe, the project team altered the bursting plan slightly. Moffat said plans at first called for a single excavation, an 8.5-ft-deep, 4-by-30-ft entry pit. The winch would simply be positioned on the upstream manhole at Tomkins Hall. In deference to the water main, though, and to avoid crowding other utilities at the intended manhole, an additional manhole was installed at the edge of the brick pavement approximately 50 ft from Tomkins Hall. The burst stopped here.

Moffat said the earth around the storm pipe and steam tunnel were carefully excavated before the burst to alleviate soil compression against those structures when the burst head pushed material aside in its progress. Just as Cowles planned, the head, hammer and replacement pipe edged past the utilities during the expansion without any impact on old conduits nearby.

Where the existing pipe had lain atop the storm sewer, however, the original installers had maintained its grade by cutting into the storm sewer’s top. Moffat’s crew repaired and sealed the storm sewer before burying the pipe there.

The one-hour burst seemed anticlimactic compared to total time of one week spent preparing for the burst, dealing with the utility concerns, building a new manhole and then cleaning up afterward. Southernscapes Inc. coordinated with the university’s own ground maintenance crew to replace sod and reseed seams, since a proprietary hybrid Bermuda seed was required to match the lawn. Any pavers and bricks that had been removed were replaced.

NCSU’s ground maintenance office said by mid-September there was little sign the project had taken place. In spite of some delay and a slight change in plans to work out the demanding requirements of this application, it was a prime example of pneumatic pipe bursting technique used to its best advantage.