The need to install new utility services under existing sidewalks, driveways and landscaping does not necessarily require a horizontal directional drilling (HDD) contractor. Unless the runs are much longer than 50 feet or the ground contains hard rock, pneumatically powered earth-piercing tools offer a much faster, more cost-effective method for the project. An earth-piercing tool is a small, missile-shaped hammer that percussively work its way through soils ranging from unconsolidated to medium hard density. It was the perfect choice for installing residential fiber optic cable in the petrified clay, sticky clay, sand and soft rock ground conditions of the Raleigh-Durham area in North Carolina.

Marco Herrera was already familiar with “missile work” prior to co-founding Advance Underground Utilities. He had spent 20-plus years laying utility lines for companies such as Pike and Mastec. Installing those services at times required some familiarity with trenchless underground installation techniques, including earth-piercing tools. In October 2014, having heard about a large ANSCO-managed fiber optics project for AT&T in the Raleigh Durham area requiring earth-piercing installation teams, Herrera formed a five-man crew, bought a used mini-excavator, rented a portable 185 cfm compressor, and consulted with Brian Norris, an account manager at Ditch Witch of North Carolina for equipment. Norris set him up with his first HammerHead Mole® earth-piercing tools. 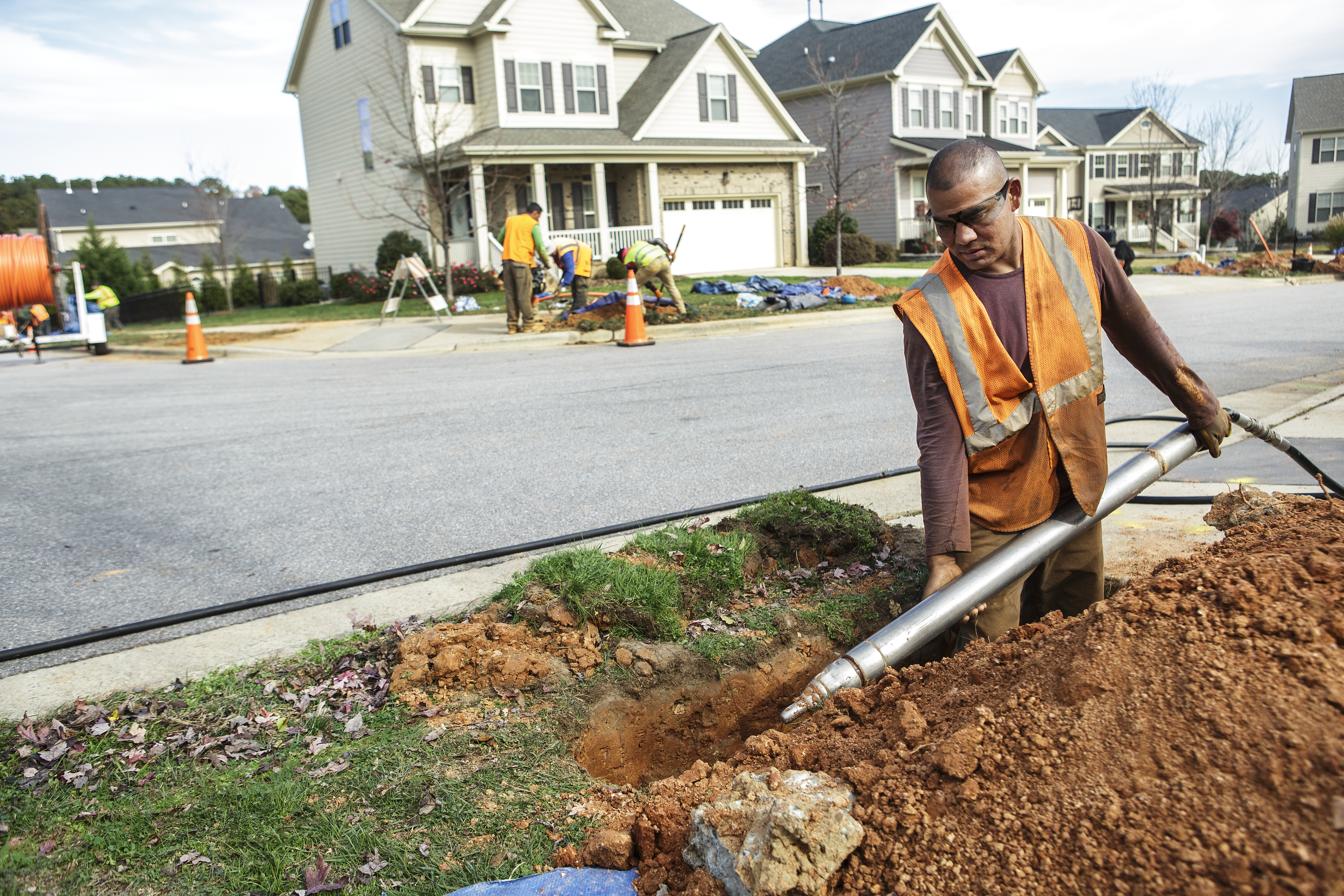 “At first we would only do smaller jobs, like 700 feet,” Herrera said. A year and a half later, AUU had grown to become an 80-man installation company with six mini-excavators and a fleet of air compressors. On any given day, as many as 20 of its piercing tools are in the ground, burrowing 5,000 feet or more in a single shift using a method known as “stitch boring.”

AUU has the method down to an art. First, its crews divide into several work teams, each team staging itself 500 feet or so from the next along the first half of the day’s 5,000-foot installation route. Each multi-resource team acts as a separate installation task force. After an excavator operator digs a 5-foot-long access pit a little wider than its bucket, laying the sod and soil neatly aside to keep the work area as tidy as possible, a crewmember pulls up a compressor and lays out the hose and piercing tool.

The secret to Advance’s exceptional on-target success rate is the certain, highly experienced crewmembers are dedicated as “shooters.”  The shooter can begin the  second shot down the line with a second mole while the first is completing its run. “In really good soil,” Herrera said, “our shooter just keeps the same mole going” – detaching the hose where the mole exits, pulling the hose back through the ground and running it across the surface to reattach it to the mole. His shooters have “super-stitched” runs for hundreds of feet this way. 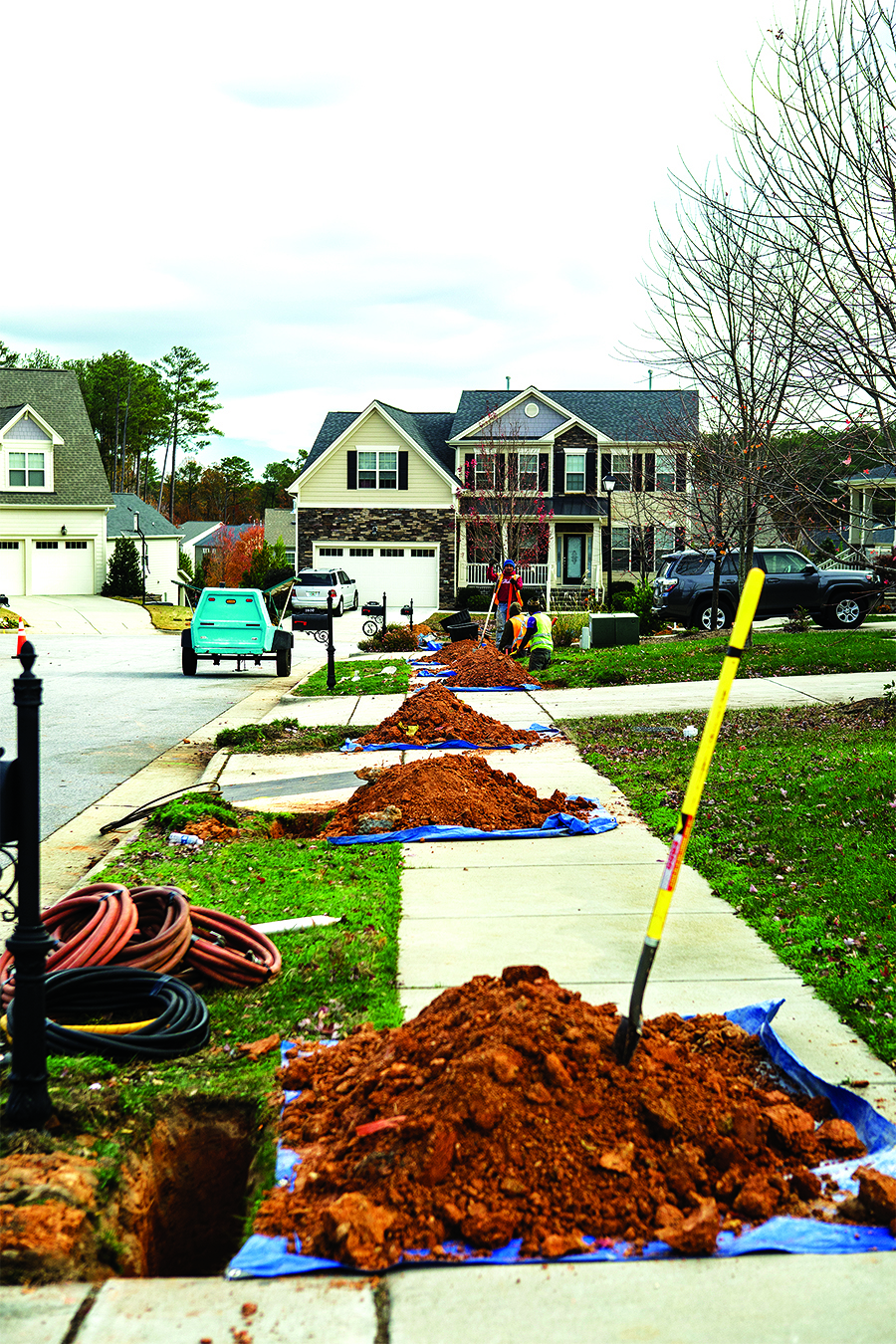 Fiber optic cable is carefully handfed through the conduit behind the mole. After installing a service pedestal in the pit, another crew member backfills it. Crews tamp, sod and neaten the lawns and clean paved surfaces. After watering the sod, the residence’s new service will look as though it has always been, undisturbed, in just a matter of days.

Norris said as contractors go, “AUU is pickier than others. And they’re in and out of there so fast, they have the sod replaced without even shocking the grass much. Residents like that.”

This streamlined production line continues moving one residence to the next until the crew’s section is completed. Then it moves to a new section further down the line ahead of work completed by other Advance crews.

Herrera said a lot of his crews’ efficiency is due to the reliability of the tools they use. “These are fantastic missiles. These HammerHead Moles work. No way would I change to something else. They are my money makers.”

In addition to reliability, Herrera said, the HammerHead Mole product line offers three types of heads, matching any condition he encounters in his service area. Most of the units in AUU’s inventory are dynamic, “Active Head®” mole models. “Active Head models can work anywhere,” Herrera said, “but when we know we are going to have really hard ground, then we will use our Catamount reciprocating heads.”

Versatility of the choice of heads also saves him money. “When we need to run two conduits in one hole, we use 4-inch expanders on our replaceable head models.” Herrera said it means he doesn’t have to have larger models of the mole on hand, which he wouldn’t use on a daily basis for this work. Since his 3-inch moles have no trouble driving a 4-inch hole in these ground conditions, the expanders are a handy solution. He also appreciates the lighter weight of a smaller diameter tool, since his stitch-boring efficiency depends on his men moving fast and frequently during a shift.

Mole expanders are compatible with AUU’s lean inventory business model. “When we don’t need to make 4-inch holes, a 4-inch hammer would just be lying in the truck. For the price of one 4-inch missile, I can have five or six missiles with 4-inch expanders. This way, all my tools are always in the ground working for me.”
Lean inventory is important for AUU for another reason. Herrera and his men have been too busy to establish a dedicated headquarters for his company. He runs his business from home. This works, since he doesn’t have unused equipment to store on his property. “So why have a separate building for a company,” he explained, “when we’d actually never be there?”

Even though HammerHead Mole piercing tools are easy to maintain and every part of a mole can be easily replaced, even in the field, AUU leaves all mole maintenance work to its dealer so it can focus solely on installing cable. “We rotate them through the Ditch Witch® dealer,” Herrera said. “When we need an to replace the seals or rings, we just drop them off at the dealer and pick up one that they have already done and is waiting for us.”

Herrera said the stitch boring method with earth-piercing tools has been accepted well in his area. “People in the neighborhoods are becoming more educated about it. At first they think, ‘Oh no. There are going to be men and machines in my yard.’ But they will come out to watch us. They see my men respecting their property, how careful they are. The people like that. I try to hire people who are serious about the job and have respect for people. Maybe when they first come, they might not have that. But once they see how we do things, they do.”

AUU is just one of the installation companies on the fiber optics project, involving over 2,000 laborers.  Herrera said he expects the massive fiber optics project will last another four to five years. After that, he is confident his piercing tools would still keep him busy: “We will always have utilities that need to be installed.” 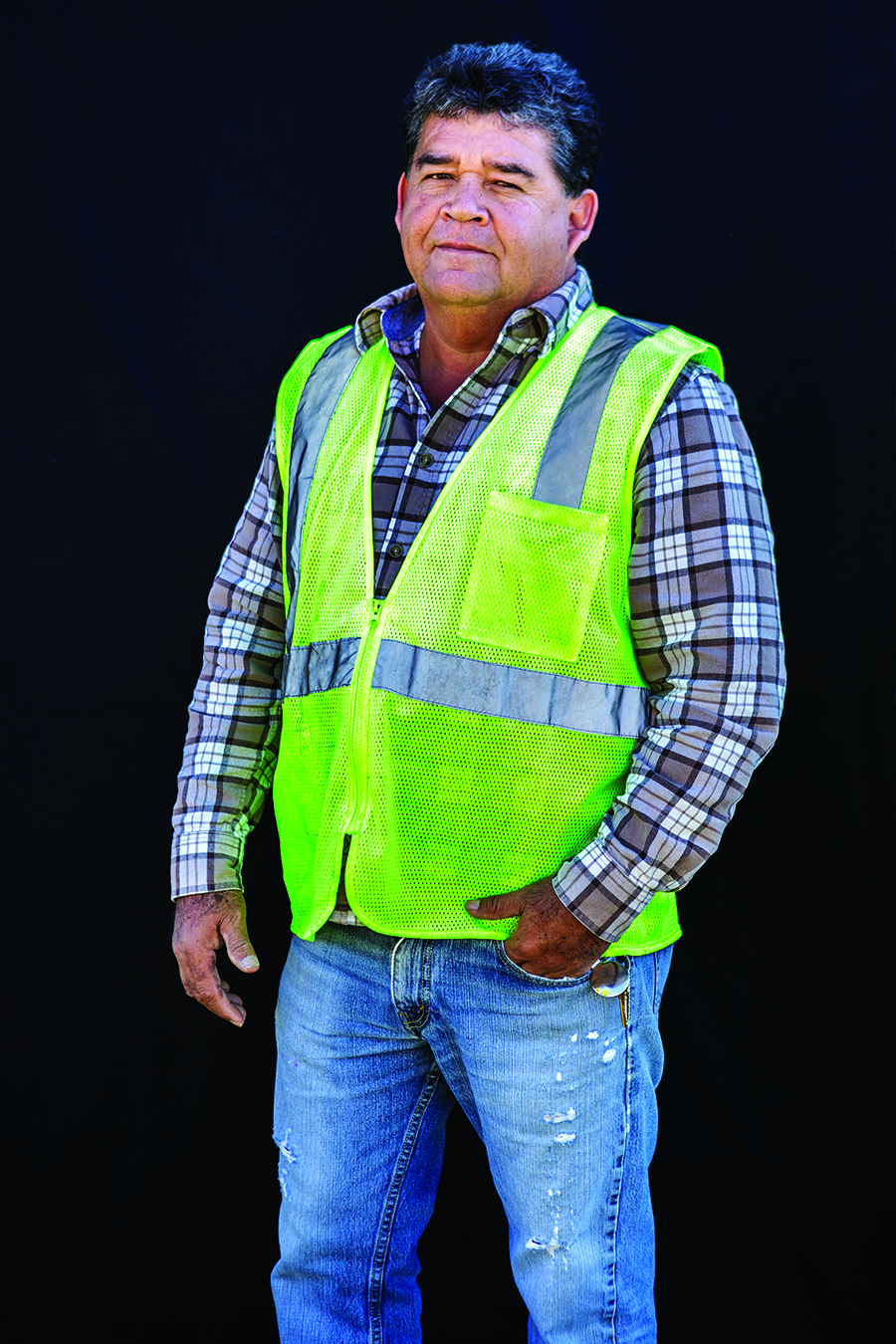