Pipe burst a “walk in the park” for No-Dig Tec

Summing up the largest diameter pipe burst performed by his company to date, John Newell, general manager of No-Dig Tec LLC of Dallas, quipped, “It was just a walk in the park.”

No-Dig Tec completed all six runs of a pipe bursting upsize from 24-inch diameter pipe to 32 and 34 inches in spite of daily rains and special requirements of working in a Trinity River recreation area this past April. The job was part of a larger Arlington and Fort Worth, Texas, wastewater sewer upgrade project undertaken by general contractor, Mountain Cascade.

Newell said, “I’d say it ranks as one of the more difficult jobs we’ve done. It certainly demonstrates what pipe bursting can do, where it can be used.”

Matching tools to the job

Mike Walk, the HammerHead ram and burst specialist who had come down from the company’s Oconomowoc, Wisconsin, headquarters to observe the burst, said, “I knew our bursting tools would go the distance, without a doubt. But the speed No-Dig was getting? They were moving an expander head of nearly 38 inches through 24-inch-diameter reinforced concrete at a foot a minute. I’m very happy with how the equipment performed for them.”

For five 200- to 325-foot bursts, No-Dig Tec placed the 38-inch expanding head fabricated by HammerHead specifically for this job ahead of a HammerHead 26-inch pneumatic bursting tool. The tool was guided by a 20-ton HydroGuide HG20 cable winch pulling from the exit pit. The string was backed up with a HammerHead 20-inch pneumatic tool on the pipe’s trailing end as a “kicker.”

Newell calculated that the 32-inch HDPE weighed 4,500 pounds per joint. On the longer pulls, Newell said, “The total weight of pipe and tooling being moved through the pipe was 60,000 pounds—and that’s not counting the force to overcome the existing pipe’s resistance.”

Though the equipment had no trouble making the pulls, half of the replacement job ran through a Trinity River park in Arlington. The jobsite’s nearby residential properties, highly valued trees and natural landscape required great care during the pull. Narrow pathways were created to allow equipment access. They were covered with lumber and a minimum of 5 inches of wood chips with temporary fencing along the sides.

Select trees were protected with picket shielding banded around the trunks. Then they were fenced off. Deflection posts were installed where there was any potential that machinery or pipe that might contact them during burst preparation or the burst itself.

Forty years ago the 24-inch RC pipe had been installed in trenches that meandered sharply around the trees. At the RC pipe offsets, which were made to form curves in the sewer line, installers had poured cement over the joints. Some of the cement intruded into the pipe.

Newell said that although digging was not permitted to identify these joints, he could tell when the expanding head encountered each one because the pipe bursting operation would suddenly slow to a fraction of its progression rate. As soon as the tooling had fractured and compressed the broken pipe away to the sides, the pull resumed its pace.

In places where the bends were judged to be too sharp to “push the limits,” Newell said, the runs were terminated. At these points Mountain Cascade created manholes to form junctions for the runs.

Newell emphasized just how well this project demonstrated the confines in which a burst this size can take place. The lengths of 32-inch pipe had to be fused offsite and then towed to the park’s limited work area, a pathway not more than 10 to 12 feet wide in most places.

Newell said that although each burst took only one day, each required at least a week of site and pit preparation. “Dirt had to be removed off site as we went, and then brought back when we were done. I had hoped to use 300 and 350-series excavators, but due to the access limitations, we had to shift down to 200-series in size.” Newell said in all the equipment consisted of two of the 200-series track excavators, two rubber-tire back hoes, one rubber-tire frontend loader and two 145 mini-excavators. “And even then it was a tight fit.”

Orchestration of equipment prior to conducting the pull was critical. “Due to logistics here, if you screw up the order, you’ve basically just lost a day’s work,” Newell said. If any one part of the lineup went in out of turn—pumps, compressors, tools, excavators, backhoe and pipe—all of it would have to be removed one at a time and the piece-by-piece lineup would have to start over.

Newell trusted organization of the pulls to 25-year veteran pipe burster Allan Woodruff. Walk, had worked with Woodruff before. He said Woodruff was one of the best pipe bursters in the business: “His retention, his procedural expertise and his attention to detail are second to none. He knows what he’s doing.” 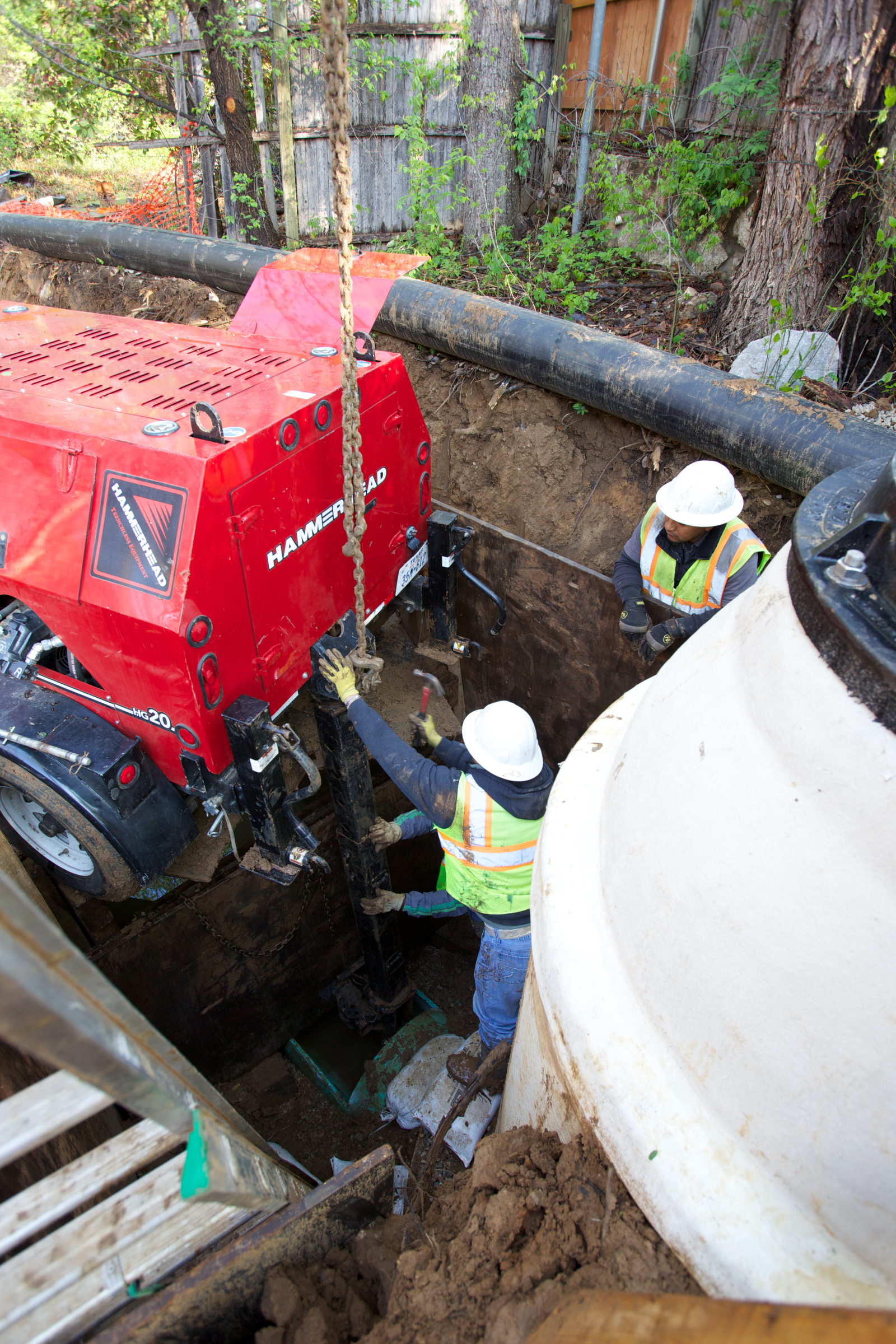 Having what it takes

Newell said all of his company’s bursting tools and accessories are from HammerHead. “I think the world of HammerHead. Alan’s worked with other equipment. He believes HammerHead’s tools are by far easier to work with. We only do pipe bursting, that’s what we specialize in, and we only use HammerHead tools on our jobs. If HammerHead has equipment I haven’t bought, then I’m renting it.”

Project owners requiring trenchless pipe replacement often limit bidding to those companies who meet specific experience requirements. No-Dig Tec’s expertise in this niche service makes it one of the few companies qualified to bid on jobs like this one, which was completed in April.