If rainwater runoff cannot be channeled through storm sewers, it will find its way to the ocean taking any other path it can. To prevent flooding and consequent damage from surface runoff, cities keep a close eye on storm sewer integrity. Maintaining storm sewers well also adds years to their useful life.

Yet when periodic maintenance could no longer keep the storm sewer system of Biscayne Island at full functionality, the Miami Office of Capital Improvements & Transportation Program scheduled its vitrified clay and concrete pipes for replacement. Though the system could still handle most small storm events satisfactorily, Miami officials wanted to ensure the pipes would continue to manage severe storm events as well.

Due to the proximity of the existing buildings to the outfall pipes, the resulting drainage improvement plan specified pipe bursting replacement technique. An office spokesperson said: “We considered the possibility of using pipe lining to extend the life of the existing pipes, but this was not feasible in this case. So the project was spec’d out for pipe bursting only.”

Maggolc Inc. was contracted to upgrade three 100-foot storm sewer runs to 12-inch HDPE as part of a larger upgrade project, which included replacement of all storm sewers for the island residential community in Biscayne Bay, rebuilding of affected streets, and upgrading street lighting. One of the existing storm sewers was vitrified clay pipe; two were concrete. Maggolc brought in US Sewers and Drain, who are specialists in trenchless techniques. US Sewers and Drain contacted Trenchless Equipment of Oconomowoc, Wis.

John Hrabosky, a representative for HammerHead, said he visited the site personally. “I needed to see what we were going to come across, the landscaping, the homes and such. Access was tight.” The storm sewers passed from the community’s street beneath the ornate lawns, through protective property walls and under the seabed. The project needed to be completed with minimal impact to the posh residential properties.

By IPBA standards, this was a Class A project: three 12-on-12 runs less than 350 feet long at less than 12 feet deep. Successful as pipe bursting projects have been over the past 30 years, the varying tidal cycles of a salt-water environment categorized it as experimental technique under Class D conditions. The most significant factor was that the pulling machine pit, or “working pit,” would be under water. 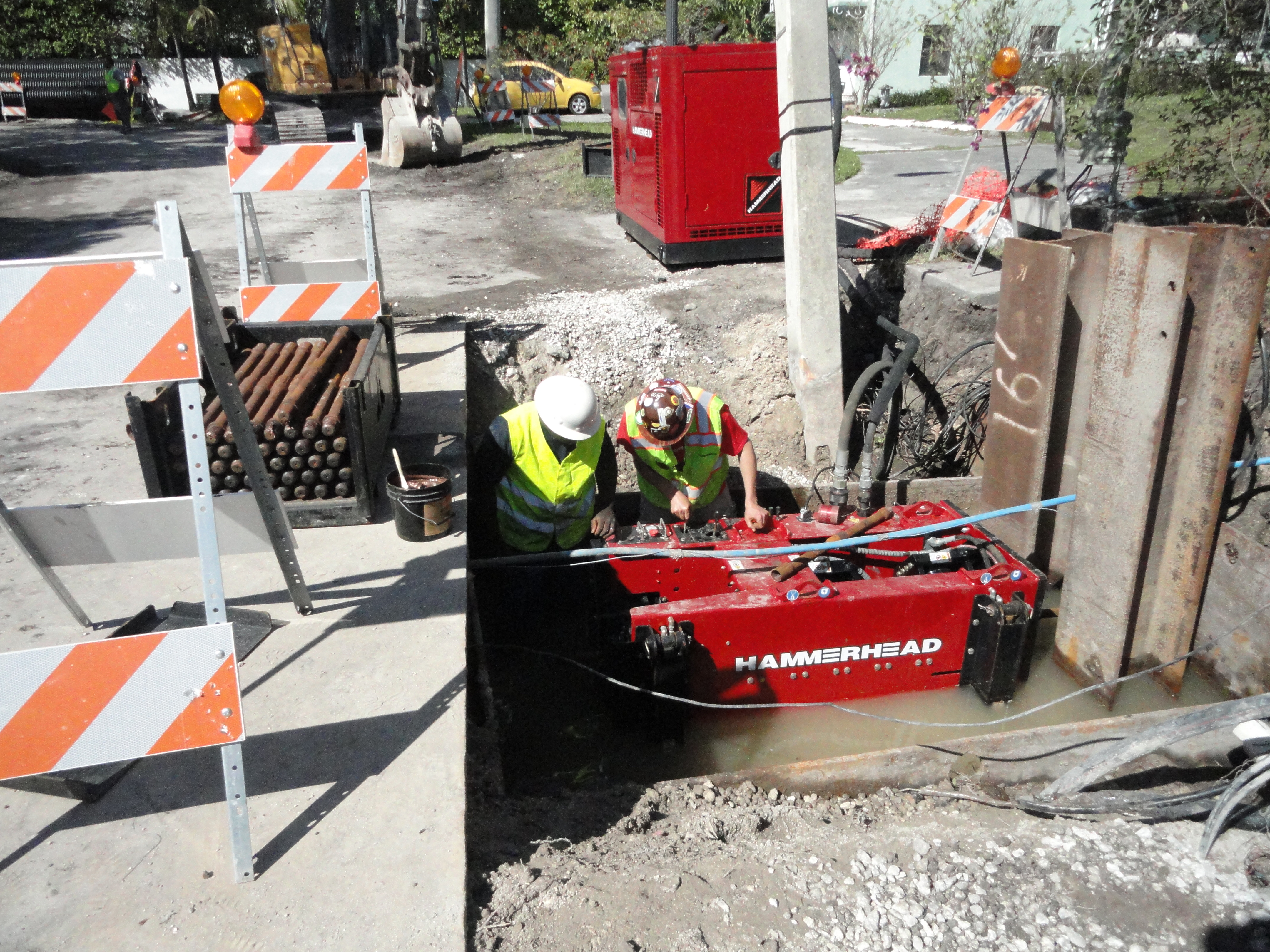 Pipe bursting method gets its name from the fracturing that takes place as the expander head, which is larger in diameter than the existing pipe, ruptures pipe as it is being pulled or driven through it. In this Biscayne Bay project, the head was pulled. Pull rods were joined together and payed out from a stationary pulling machine in a pit dug at the storm sewer at the street.

The pipe is drawn in place behind the expander head. As the pipe ruptures, its pieces are compressed into the ground surrounding it. Using a larger diameter expander head reduces the force necessary to overcome friction against the replacement HDPE pipe during the pull.

In a dynamic pipe bursting, the head is driven through the ground with a percussive pneumatic hammer. Hrabosky said the pneumatic technique would have worked as long as positive air pressure was available to keep water out of the hammer, but going with hydraulic over pneumatic “was a sure-fire choice for this job.” The location for the working pit was only 4 feet above sea level. To hedge against any possibility airflow would be interrupted, they would normally pump the pit. But trying to pump a pit dry this close to the ocean would be futile.

However, immersion isn’t a problem for HammerHead’s HB100. “HammerHead’s pulling machine doesn’t have any electronics or electric controls on it to worry about,” Hrabosky said. “There was never a doubt that it would work in the wet conditions at Biscayne Bay.”

The entire length of each replacement pipe was fused up beforehand. It is usually best to pull a run all at once, in as brief a period as possible, because as soon as the expander head passes, the compressed ground begins to “remember” its place. Within a short time after a pull is made, the ground will move back in around the new pipe just as it had lain around the original pipe.

A one-lane path was left open around the coned off area of the curbside pulling pit that was dug for the HB100. Residential traffic flow at that point slowed but was not otherwise interrupted.

The ocean end of the storm sewers was 3 feet below the sea’s surface, so no entrance pit was required in this application. Restricted to working at low tide, however, the crew had relatively short work windows for completing the three pulls. At most they would have six hours for a pull, only one pull to a shift. Maggolc worked out shift scheduling based on the bay area’s tide tables.

Since compression along the moving expander head causes a temporary swelling of the surrounding ground, the crew also needed to chip away clearances in the seawall large enough to prevent impact to the wall. 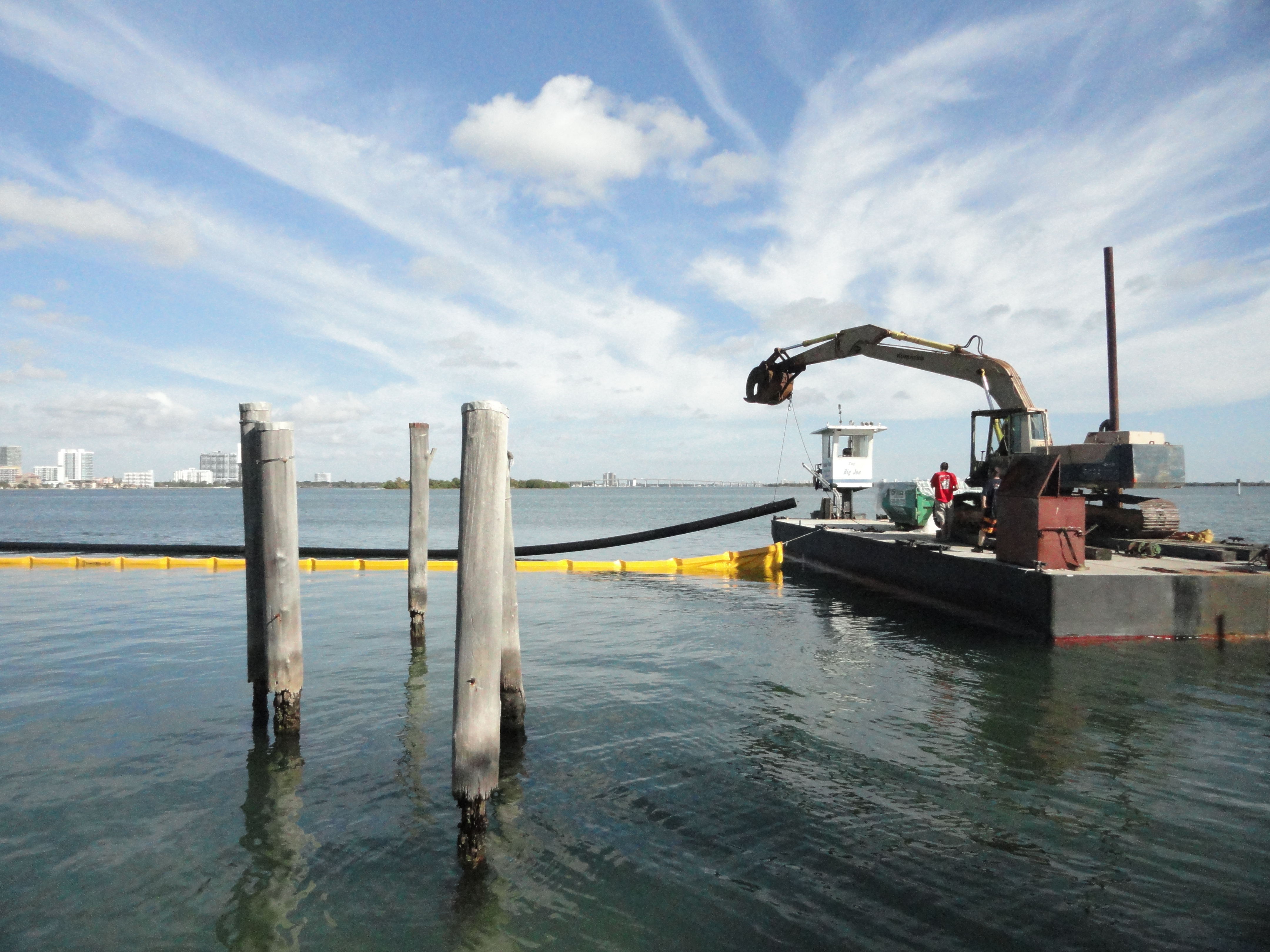 HammerHead sent pipe bursting specialist Mark Maxwell with its equipment to be on hand for the pull. For jobs with multiple runs, Maxwell will usually instruct the crews and then serve as a standby consultant. In this instance, since the crews were unfamiliar with the equipment and because the precision required for these pulls left no room for error, group consensus was that Maxwell would serve as primary operator throughout.

Maxwell said he had the easy part, since most of the work for a pipe burst is in the preparation. The burst itself didn’t take long at all. Once the HB100 was set in the pit, it took Maxwell just 20 to 30 minutes to pay out 3-foot lengths of pull rod from the HB100 to the end of the existing VCP.

After the 100-foot lengths of HDPE had been fused onshore, their ends were plugged to make them buoyant,  allowing them to be floated into place at a preparation barge. At the barge the expander head between the pull rod and the replacement pipe. An excavator aboard the barge lifted and held the HDPE in place as crews made the connections.

The burst itself was “smooth as butter,” Maxwell said, requiring at most 15 tons of the HB100 pulling machine’s full 100-ton capability. Pulling the expander head and replacement pipe through the sewer took a half hour or less. Restoration required only repair of the seawall where it had been chipped away to accommodate expansion and backfilling the working pit. Maxwell calculated total time of the project dedicated to the pipe bursting operation as “just under a half hour to pay out, another 20 minutes to half hour to pull back, per run.”