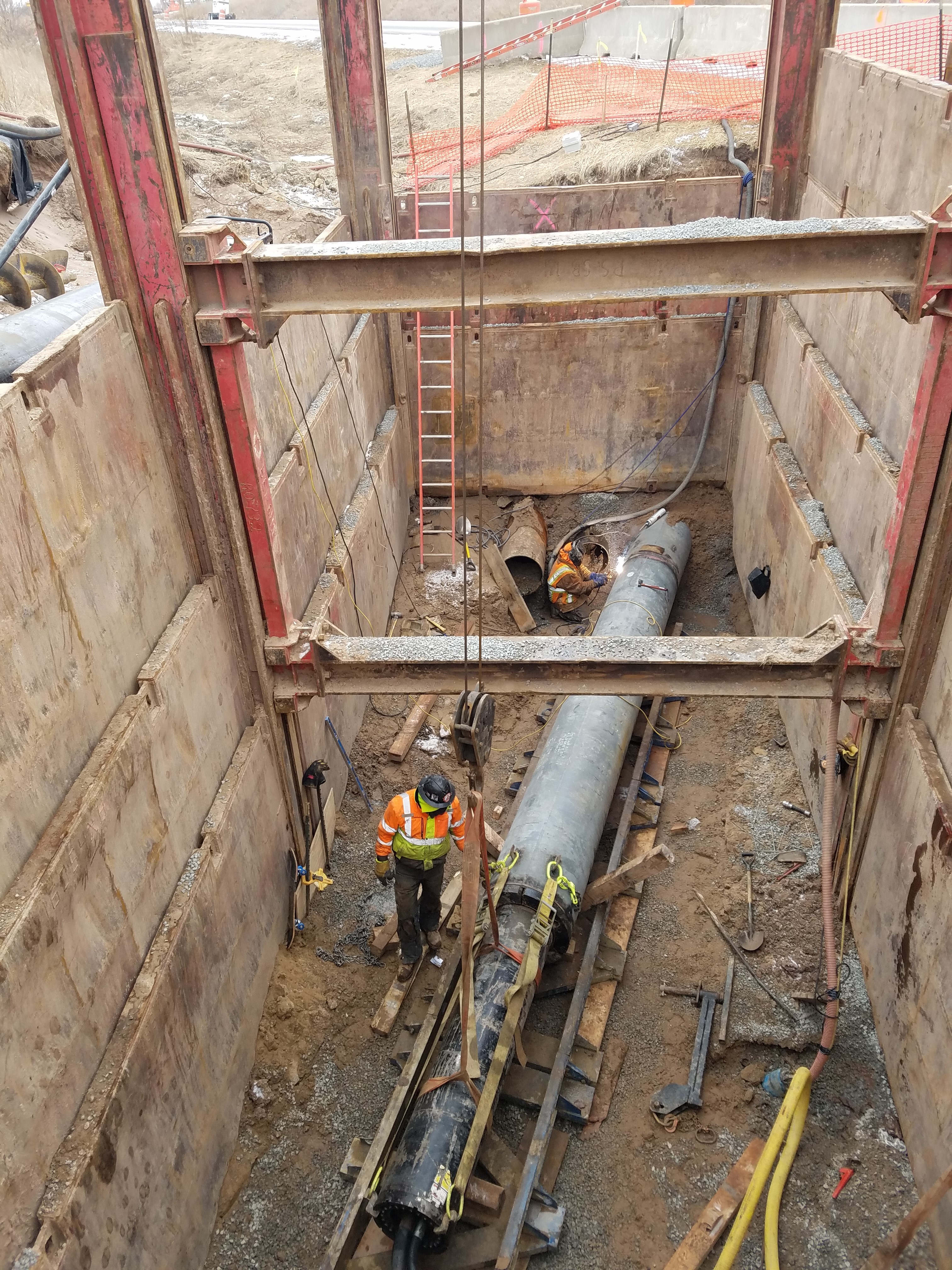 The site of a future industrial complex located southwest of Wrightstown, Wisconsin, required installation of 90 feet of 24-inch casing for a new 12-inch PVC sewer line. Trenchless specialist Red Ants Boring Co. of Zion, Illinois, had planned to auger bore the line in at a 45-degree angle beneath So. County Line Road near the ramp where Interstate 41 passes over it.

Red Ants knew water would be a complication. They learned that a contractor for a separate project just a half mile down the road from the site they were working was struggling with the high water table they ran into just a few feet down., but as an experienced trenchless specialist Red Ants has been successful in wet conditions plenty of times before.

Owner Pedro Montejano had worked 23 years in pipe installation prior to founding Red Ants Boring eight years ago. Today, employing a permanent staff of 12 and expanding its workforce to as many as 18 depending on the jobs they’re working, Red Ants expertise in preserving the integrity of bores is backed by years of meeting strict specifications of demanding installations. The first job Red Ants took on as a startup was a five-year-long project for a railway, installing crossing pipes along a 1,200 mile stretch of line from Chicago to St. Louis. The company’s next job was at O’Hare International Airport.

The company has a fleet of five boring machines and array of excavation and transportation equipment it has used to install pipe ranging 20-inches to 104-inches in diameter.

Water alone might not stop a Red Ants job, but it wasn’t the only difficulty on this project. The scheduled start coincided with a brutal cold snap in December. Daily lows ranged between 0 and -16 deg. Trying to start equipment each morning was contributing to delay.

Since the site was well within Red Ants’s service area, which covers U.S. northern-tier states from Wisconsin to Ohio, they are well-accustomed to such conditions. “Yes, it’s not always a nice day when we work. If there’s work to do, we do it. We do whatever it takes to get our customers’ jobs done for them on time.” 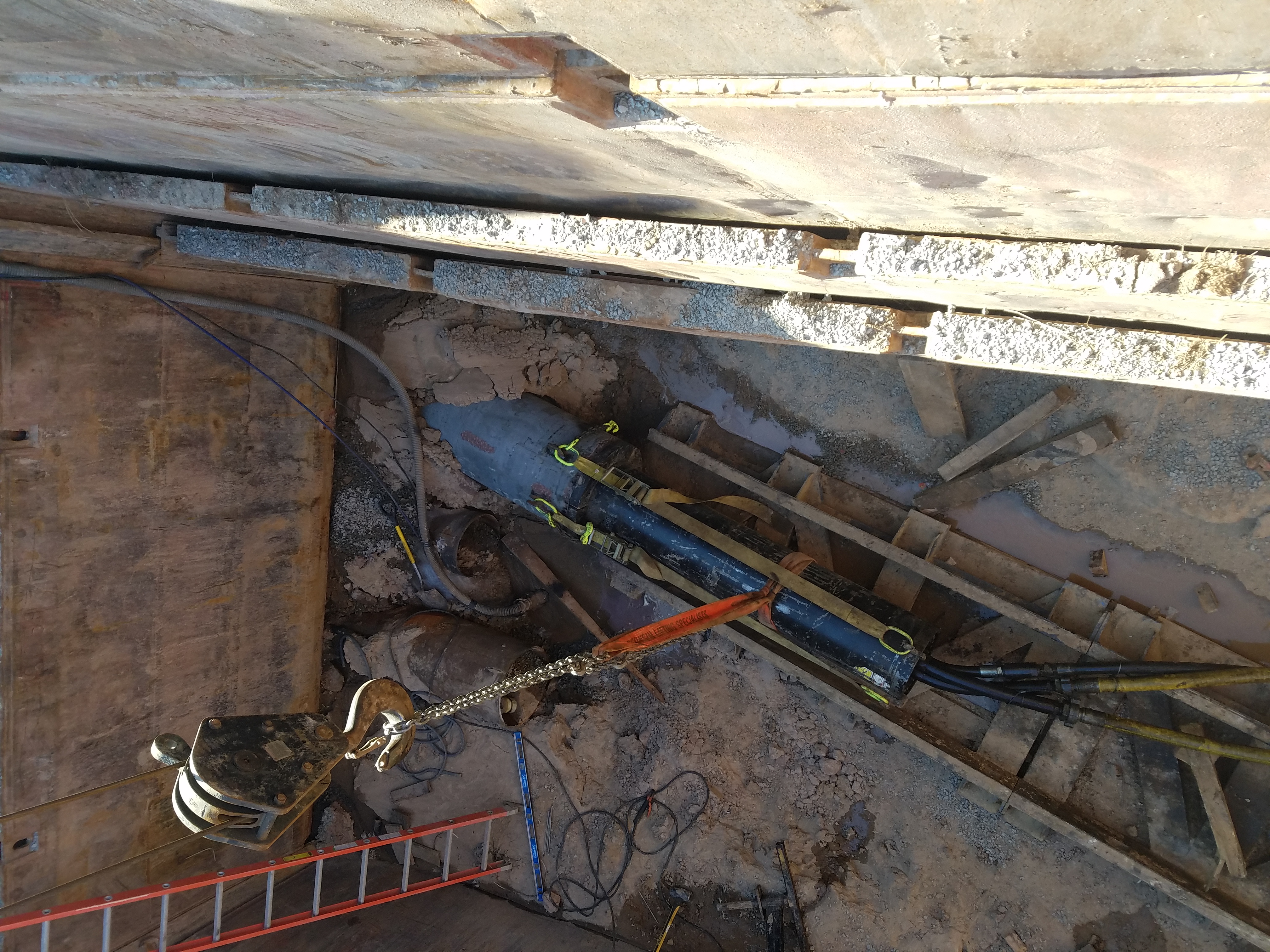 Shortly into this job they encountered free-flowing sands and large cobble. Montejano said, “If they were only just small sand pockets, and we knew we could preserve the bore and complete the job quickly, before anything moved, we’ll go right through them, no problem. But if the sand wants to move, we don’t want to risk creating voids.”

Time was ticking as they worked on a boring strategy to deal with the sand. For any contractor, time is money. In hindsight, Montejano wished he would have made the change to pipe ramming sooner. “I was being obstinate, I guess, a little stubborn.”

Montejano prefers to use his horizontal directional drilling (HDD) and auger boring machines with steerable heads for the control they give him over azimuth and grade. For more than 80 percent of his jobs in the Great Lakes region, he said, it’s exactly the technique he wants.

The first time he used a ramming tool was on a job that crossed beneath a creek. “On that job, drilling wasn’t going to do it. I had to look for something else. I had heard of HammerHead and gave them a call.” Getting to witness the success of a pipe ramming operation in person sold him on it. “Now, whenever conditions get too bad for boring, I look for a hammer.”

“I was concerned about achieving accurate angle and grade. I worried it might not come out as precisely as with my boring machine, so the larger pipe was a precaution. If we were off a little, I thought, I would have more room to move the PVC around inside the bigger casing. As it turned out, I could have stayed with 24. We were dead on, right on target.”

Montejano said pipe ramming fundamentals aren’t that difficult to learn. “It’s a simple, straight-forward process, really. We aim the casing and hammer it across then use our auger to clear it of spoil. Once you catch on to how it works, the rest is basically common sense. On all the jobs we’ve used a hammer, we have had really good success with it.”

The ramming tool was powered by a 1,700 cfm compressor feeding two 2 ½-inch forward lines at 110 psi. A third hose fed the reverse side of the ramming tool, which allowed for installation and removal of the hammer and collets without having to weld it on or cut it off with a torch. The HammerHead tool’s ability to impact in reverse means it can unlock itself from the collets, rather than having to cut the pipe or weld on a segment with the hammer pre-locked to it.

Red Ants augered spoil from the first 20-foot section of pipe then completed the rest of the run without needing to auger more until all the pipe was in. Welding joints took less than an hour each. Red Ants installed the entire 90 feet of casing in one day.

Montejano said going with the hammer let them finish within a reasonable amount of time for his customer. His only regret looking back is that he didn’t make the decision sooner. “Next time we get in trouble like that I’m going to the hammer right away.”

Although the hammers that he wanted were available for immediate pickup on this job, Montejano said he is considering having one lined up ahead of time, on standby, at least for jobs with questionable ground conditions. He’s even considering purchasing ramming tools of his own. “I really believe every boring contractor needs a hammer ready in case they run into bad conditions.”

And he said each time he has used it, he’s learned to trust it more. “The thing I’ve learned with pipe ramming as a boring contractor is, it’s more accurate than you might think. When you line it up right, that pipe is going to go right where you point it.”

Use of a pneumatic ramming tool had not only saved this job, Montejano said, but also his bottom line: “To be honest, this job couldn’t have been done any other way. That hammer saved us from losing a lot of money.”