It might not be possible to make a municipal pipe-bursting run more difficult than a 540-foot section of an Eagle, Idaho, sewer upgrade that ran beneath a BanBury Golf Course fairway. The section was part of a more than 2,000-foot project upsizing 8-inch PVC to 12-inch HDPE pipe that included reconnection of 17 sewer services through upscale residences of the Banbury Meadows community. 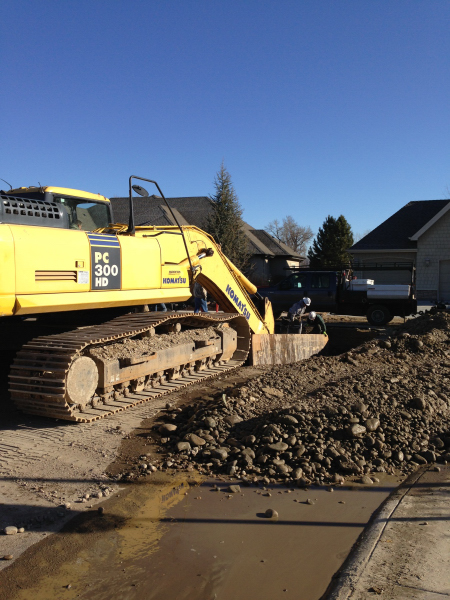 The existing 8-inch PVC sewer pipe wasn’t all that old but it was already at maximum capacity for current demand. City planners expected demand to continue to increase, so they designed a pipe upgrade to 12-inch HDPE and assigned it to Titan Technologies.

Founded just 10 years ago, Titan Technologies is a utility installation and replacement contractor specializing in sewer and water. Titan’s founders, who combined their years of complementary construction and pipe laying experience in the venture, embraced trenchless techniques almost immediately upon establishing the company. They are among this region’s pioneers, though pneumatic piercing and ramming as well as static and pneumatic pipe bursting techniques have actually been available more than 30 years in some places, Thompson said.

For the difficult BanBury project, however, Titan consulted Jim Moore of HammerHead Trenchless Equipment. Because of water complications in this jobsite, they chose a hydraulic system, the HammerHead Hydroburst HB175 static pipe bursting system. Acquisition of the HB175 and 16-inch PVC expansion head was coordinated through Silas Farris, sales representative for the Ditch Witch of the Rockies store in Denver, Colo.

With 175 tons of pulling force for pipes up to 24 inches, Moore thought at first the HB175 might be a little overkill for a 12-inch pipe upgrade project. It proved to be a fortunate choice under the fairway, however. 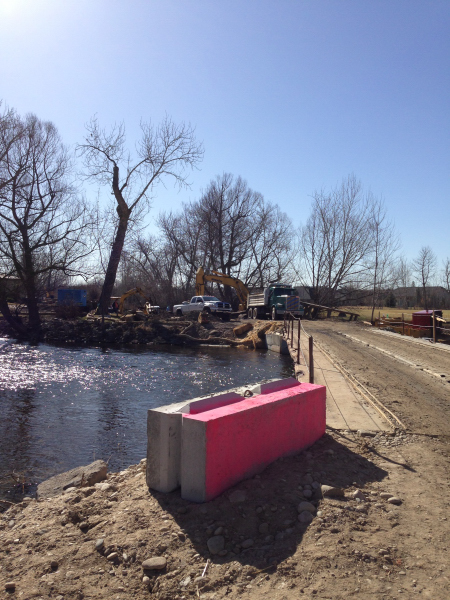 Titan Technologies’ Project Manager Clifton Cox described the challenges presented throughout the project. The existing pipe lay at 19 feet in a pipe-chip bed of crushed rock known by some as “pit run,” which is sandy, cobbly dirt. Fracture sizes ran anywhere from ¾ inch to 12 inches, with 8-inch pieces being common. Such material does not displace nearly as easily as sand or clay. This makes pipe bursting more difficult even if just replacing 8-inch pipe with 8-inch pipe. However, this project required considerable expansion. To make room for 12-inch replacement pipe and the bell connections, the 8-inch pipe walls would be sliced and displaced by a 16-inch diameter bursting head. With such resistance from the pipe bed, displacement would be upward only.

Water was another complication. The Boise River was just yards away from the fairway in some places. For the fairway run it would also need to pass under a shallow slough. So it was no surprise that the water table was found at only 2 ½ to 3 feet deep during entry and extraction pit excavation.

The fairway pull required both pits to be 25 feet long by 7 feet wide and dug 18 to 20 feet deep. As Titan’s crews entered the water table at 3 feet, they pushed down four 3-inch submersible pumps running off a 45 kW generator to dewater the hole. Three pumps were left to maintain the dewatered hole once the trench boxes were at depth. Over the three-day period, Thompson said, he estimated about 680,000 gallons of water were moved from the pits.

The first run for this section of the project started in a manhole in the street’s right-of-way. The full 540-foot length of HDPE had been fused on the surface. Titan pulled it under the golf course fairway from that manhole to a manhole on the course. The pull posed no problem for the HB175, requiring about only 60 tons of force.

Beyond that second manhole, the last 80 feet of the run made a slight bend. It wouldn’t have posed much of a problem except that here the original pipe installers had switched to ductile iron. Mike Walk, the HammerHead technician who was on site during preparation and the pull itself, said he had seen projects something like this before. Most likely the installers made the switch since they would be laying the sewer under surface water in this section.

The problem for a pipe-bursting operation was that different splitting heads are specifically designed for either ductile iron or for PVC. To do this project without excavating another extraction pit on the golf course itself and doing the replacement in two separate pulls required choosing one head or the other.

All stakeholders agreed they would rather attempt a single pull in hope of avoiding more excavation, so it was a matter of which head to use. Since the greater part of the run was PVC, Walk said the PVC head was probably the better choice. Using a ductile iron splitter on such a long length of PVC would run the risk of bunching up the PVC ahead of the splitter rather than neatly displacing it. If that should happen, the drag would become too much for the puller, and they’d have to dig up the fairway.

On the other hand, PVC splitters are not ideal for ductile iron. But Walk said he had a fairly good idea what to expect. Instead of splitting this shorter run of 8-inch ductile iron pipe, the 16-inch PVC splitter was likely to push the pipe ahead of it. He believed the HB175 would give them enough power to complete the pull. 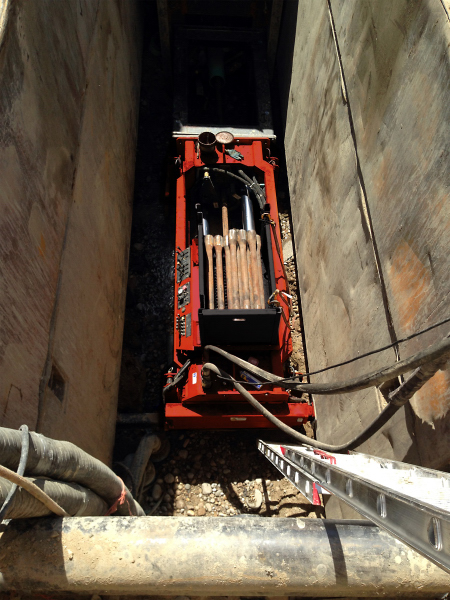 Brian Jones, Titan Technologies’ project superintendent, performed the pipe burst. As anticipated, the PVC splitter shoved the ductile iron ahead of itself. Jones stopped the pull every 3 feet to remove a pulling rod, but he also now had to cut away the iron sewer pipe as it came into the pit. It wasn’t nearly as simple as it may at first sound. He could not get the abrasive blade completely around the pipe.

“I would get maybe 80 percent of the way around it with the hot saw at most. But that’s all. So I wrapped a chain around each length and sheared it off by pulling up with an excavator.”

Every time he stopped progress to cut pipe and remove a rod, the bursting head assembly was left to sit still in wet ground that started to close around it. Jones would start the pull again from a dead stop. It took the full force of the HB175 to get it to break loose again.

“Each time we maxed out the 175 and it wasn’t moving, my heart sank. But then it would start again, jerking slowly at first, maybe at 1 foot a minute,” Jones said.

Had the pipe become too much for the HB175, Titan would have no choice but to dig up the fairway and the homeowner’s property. Thompson said it would have been an enormous increase in time and cost, and no one wanted to have to cut into the golf course.

“We’d have had to dig 20 feet down the full length of the pipe. We’d be working in water as soon as we got to the 3-foot level. Then we’d have to restore it all,” Thompson said.

“We did the rest of the project with normal bypass. But here we used a test ball valve so we could control the flow and hooked up a vacuum truck with 2,500-gallon tank. The driver would make a trip to empty it once every 30 minutes or so, but service was never interrupted for the golf course or the residents.” 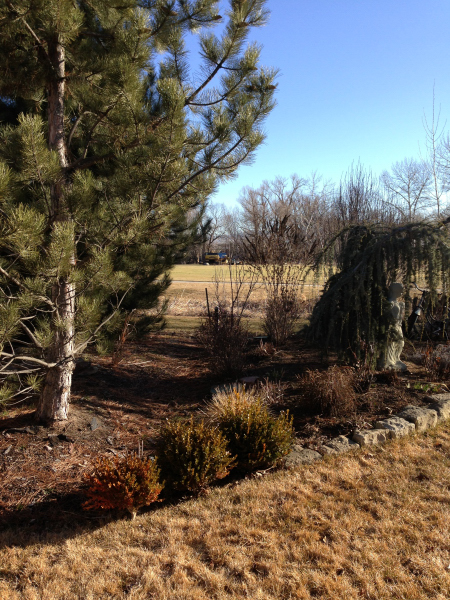 Normally the pull would have been just a few hours. For instance the first 460 feet were pulled from about 1 p.m. to 4:30 p.m., Jones said. “The thing that took us so long was cutting pipe. From 4:30 to 12:30 at night we were throwing that ductile iron out 3 feet at a time.” Jones looked back on this part of the project as one of the hardest pipe bursting replacement jobs he had ever done.

Even with the complications, the pull was completed in a single day. And it hadn’t required a bypass being set up across the fairway, which Thompson said was another benefit of trenchless pipe splitting technique.

Thompson said, “I would venture to say open cut here would have run double the cost – and taken twice as long, too. Easily, without any exaggeration.”

Though the last 80 feet of the fairway run had seemed touch-and-go, pipe bursting was the only technique he’d have recommended for the entire Banbury Meadows sewer upsizing project.