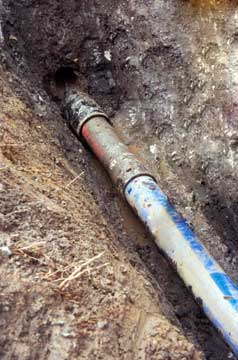 The Dalmeny Estate lies just seven miles from downtown Edinburgh, Scotland, on the shores of the Firth of Forth, the world famous Scottish seacoast indentation. The current Earl of Rosebery, whose family has owned the huge estate since the 16th century, takes an active role in managing the property. He has been a general contractor for many drainage pipe installations, having to carry out all the road crossings within his estate and on his forestry sites in the Borders area of Scotland. This particular drainage pipe replacement project was no exception with Lord Rosebery assembling equipment and the necessary technical assistance to get the project completed.

In his mid-70s, Lord Rosebery cut a commanding figure in his muddy work boots at the controls of a trackhoe excavator. In addition to owning a fleet of construction equipment for work on the estate, he has normally rented small diameter pneumatic tools from U Mole.

On this occasion, Lord Rosebery wanted to replace a 12-inch (30 cm) collection drainage pipe that was too small to handle water runoff from a number of 10-inch (25 cm) feeder lines. Built 100 years ago, the Victorian clayware drain collected rainwater from two side roads and an entire open field area. Because of the pipe’s insufficient carrying capacity, any rainwater would back up and flood the upland fields for weeks.

Much of the 12-inch (30 cm) pipe length would be replaced by open trenching methods across the field. The crossing of the pipe under the B924 road was another matter. Since the two-lane road could not be open-cut, this 130-foot (40 m) drainage pipe section would have to be replaced using the pneumatic tool pipe bursting method. The replacement pipe needed to be on the same line and grade as the existing pipe.

The plan called for upsizing the 12-inch (30 cm) pipe to 16 inches (40 cm), double upsizing to assure adequate pipe capacity. This two-step upsizing was considered potentially troublesome because of the rugged Scottish coastal type ground conditions, which consisted of heavy clay with occasional large stones and boulders.

Because of the ground conditions and the double-upsizing of the collection pipe, the decision was made to use pneumatic pipe bursting employing the HAMMERHEAD MOLE® 16-inch (40 cm) pneumatic bursting system.

This HammerHead pipe bursting system uses a front-mounted bursting pilot to crack the existing pipe and keep the path open as the pneumatic tool with a rear mounted puller pulls in the new HDPE SDR 17 replacement pipe. This system allows the contractor to use a larger, more powerful pneumatic tool than one that would fit inside the new pipe. With this rear puller design, the larger more powerful pneumatic hammer could not only break the existing pipe, but also expand the annular space two additional pipe sizes in these tough ground conditions.

To accomplish the pipe bursting project, a launch pit was excavated at the 16-foot (5 m) depth of the existing line. After the new line would be put in, plans called for the construction of a new manhole at this location. At this depth, the burst path under the road would take the line through an existing 150-year-old stone manhole on the opposite side of the road that would be broken and removed.

When the receiving pit was ready and dry weather prevailed, the go-ahead was given. The158 feet (48 m) of the new HDPE pipe was fused, assembled and bolted into the rear puller of the HammerHead 16-inch (40 cm) pneumatic tool. Lord Rosebery set up his 15-ton winch at the receiving pit, and its cable was secured through a downhole pulley, strung through the existing pipe and attached to the nose of the pneumatic tool.

Initially, there was concern on all fronts about the possibility of a successful job. The line depth, ground conditions and double upsize all added to the difficulty. But U Mole’s knowledge of the local ground conditions, combined with the worldwide bursting experience of HammerHead Trenchless Equipment (who provided on-site support), allowed for proper equipment selection. Once the problems were out of the way, the job went smoothly with the large HammerHead tool bursting the old pipe and pulling in the new pipe in 45 minutes.

With the new pipe in place under the road, the manhole could be installed and the upstream connections made, to make the entire drainage system operable. Now when it rains, the uphill fields would be properly drained for continual grazing of cattle and sheep.