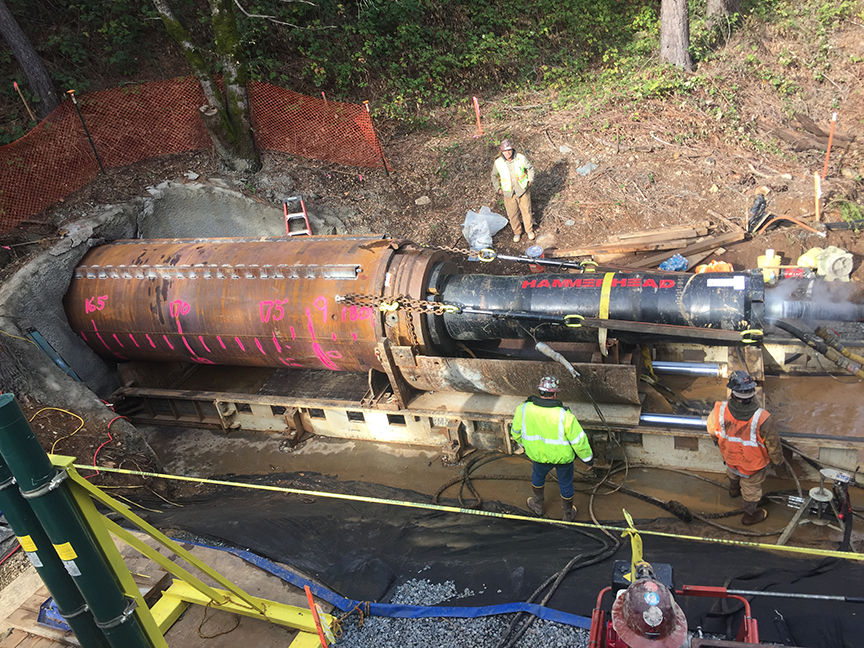 Drill Tech Drilling & Shoring Inc. first demonstrated its 34-inch HammerHead Trenchless pipe ramming tool while driving 108-inch steel pipe over a 54-inch culvert beneath the scenic Pacific Coast Highway. The technique is called “pipe swallowing.” The smaller-diameter culvert was removed with the spoil. The 34-inch pneumatic hammer made by HammerHead Trenchless, a Charles Machine Works company, is the world’s largest pipe ramming tool. Yet Drill Tech proved it could still be used in the tightly confined work space of an environmentally sensitive area, avoiding disruption to the busy traffic on the road above.

Its next pipe swallowing job for the California Department of Transportation (Caltrans) was an even greater feat. The job called for ramming 250 feet of 72-inch-diameter casing over a 48-inch corrugated metal culvert with misaligned joints. At its deepest, the 48-inch CMP of this job lay more than 70 feet beneath Interstate 80 a quarter mile from Weimer Cross Road in Colfax, 45 miles northwest of Sacramento. The “as built” plan prescribed a 6.8-degree grade upward from the machine side of the installation.

The length of run was difficulty enough. The lay of the pipe complicated the task. Drill Tech Engineer Brian Harris said they had originally wanted to swallow the culvert with 54- or 60-inch-diameter casing. After using a laser and prism to measure feasibility along the run, they knew they would need 72-inch pipe to handle its offsets. “The culvert really moved around, sort of zig-zagging one end to the other,” Harris said.

Then work that began in December of 2016 was interrupted for five weeks by what Harris described as “one of the wettest winters in California history.” Torrential flow through the pipe caused operations to cease for almost five weeks after pipe was already halfway in the ground. That gave the ground ample opportunity to close tightly around the pipe and seize it in place.

During a full month of jobsite preparation, Drill Tech cleared trees and brush along the creek and staged its pipe and equipment on a private easement nearly out of site from interstate traffic. Mike Walk, a pipe ramming expert from HammerHead Trenchless who had come to visit the project, said: “From the freeway all that could be seen was the boom from a crane. Drivers wouldn’t realize anything was taking place beneath them as they drove along.”

Drill Tech built check dams at the creek and lay filter socks around the work area to protect the creek from potential jobsite runoff. The crew shored up 200 feet of hillside around the culvert’s mouth, installed soil nails and shotcreted the vertical face at the culvert. Depending on soil conditions and supplied with up to 4,700 cfm of compressed air at 110 psi, the ramming tool can exert over 5.5 million pounds of impact force at 120 blows per minute. Drill Tech poured a cement slab 42-feet long, 13 feet wide, and 6 inches thick to accommodate the 27,500-pound ramming tool and a cradle-like sled, as well as to provide guidance for ramming angle and azimuth. Drill Tech secured the slab with eight micropiles and installed four reaction piles for a hydraulic pipe jacking tool kept on standby if needed for assistance.

A routine requirement, Caltrans specified that a representative from the ramming tool’s equipment manufacturer must be on hand whenever it was in operation. Ditch Witch of California is the authorized dealer of HammerHead Trenchless equipment for the state. Its Cameron Zoucha is a credentialed representative of HammerHead pipe ramming systems. Walk said, “If you’re ramming in California, Cameron’s the pipe ramming expert to see. He is a meticulous, mechanically gifted individual, who envisions every aspect of a ramming operation before it even takes place. He foresees anything that might present a problem and makes incremental adjustments on the fly. His customers are in good hands.”

Zoucha always likes to spend a day or two with new clients, he said, but Drill Tech is an experienced pipe ramming contractor. “I’m happy to help them out in any way I can, and I did take turns operating the hammer,” he said. “But mostly I provided moral support and was primarily there to help them meet their requirement to have a rep present.”

Three 1,600 cfm compressors linked in series through a common manifold supplied air to the 34-inch ramming tool. Zoucha said, “They never ran more than two, though, and most of the time those two weren’t running at full capacity,” he said. “At most we maybe only used half of the tool’s full capabilities.”

Regarding fuel expense to power the ramming tool, Walk roughly calculated that the compressors only ran 20 to 25 minutes a day – the length of time to drive each 40-foot length of pipe through ground conditions of cobble and sand. “So even considering the size of this project,” Walk said, “compressors ran maybe only 8 to 10 hours overall.”

The balance of a shift was required to for two welders to join each section of pipe onto the run. Laborers on site throughout the project averaged just six to seven personnel per shift.

The ramming operation ran smoothly for the first 175 feet of the 250-foot run. It was at that point persistent rain made it impossible to continue. Ramming could take place with a little water coming through the culvert, Zoucha said, but caution must be taken with higher rates of flow. “We had a coffer dam on the uphill side and pumps set up to divert 1,000 gpm. But during these rains, water was shooting out of the pipe at over 3,000 gpm and was still overflowing the coffer dam. We had to back the hammer off to let the water drain.”

Pipe ramming operations can continue when a little water is in the pipe, but greater flow can cause “hydraulic action,” Zoucha said. “A pipe full of water can become a giant hydraulic ram. You don’t want all that pressure in a failing culvert, wasting your hammer’s energy on blasting water out the other end.”

The day they ceased pipe swallowing operations Drill Tech could not have known it would be nearly five weeks before they could resume. Zoucha said, “It wasn’t really a problem to leave the equipment there because of how well Drill Tech had set everything up. Nothing was going to happen to it. We just had to wait it out.”

Drill Tech had shut down in mid-December. It was well into January before they could return. The pipe had lain motionless in the ground for more than a month. Although it had rained steadily most of that time, the culvert lay beneath an impermeable “roof.” Above it lay 70 feet of compacted ground topped by a thickly paved interstate. They feared the ground may have seized the pipe. “But we hooked the ramming tool up to the pipe, and it continued as if it had never stopped,” Harris said.

Since Drill Tech never used the tool’s full capacity, Zoucha said they might have been able to swallow the pipe using a smaller model. “But you see, you don’t know that going in,” he said. “You want to go to a job like this one with the biggest tool you can get and not have to worry about it.”

Harris never doubted that Drill Tech could complete the installation successfully. The company specializes in all forms of geotechnical solutions. Services that it provides to the construction industry from its California offices in Antioch and Corona include earth retention, foundation support, tunneling, shaft construction, ground treatment, dewatering and architectural shotcrete. Its mastery of a complete range of geotechnical solutions now includes the pipe swallowing technique, whose value for difficult culvert replacement projects it has now proven twice on Caltrans projects.

Nevertheless, Harris credits the ramming tool in large part for how easily the pipe moved after the delay. “I actually don’t believe a smaller hammer would have worked. I’m glad we had the 34-inch hammer.”

The pipe swallowing technique is based on conventional pipe ramming method, an economical and safe means of using pneumatic percussion to drive steel pipe in a wide variety of soil types. Its advantages over other pipe installation methods include minimum equipment outlay, relative simplicity of operation, and suitability for use in sensitive ground conditions without disturbing ground around the pipe or construction or surface features above. As it is driven in place, the pipe itself guards against cavitation, making it a preferred method for installing casing where subsidence is a concern, such as beneath roads and railroad beds. Traffic continues unimpeded by the ramming operations. Pipe ramming can often be used when other means of installation cannot. And in some cases, it has been used to save a project when another installation method has failed.

The pipe swallowing version of pipe ramming is used to replace a pipe or casing in place with larger diameter casing. The casing is rammed around the existing culvert, which is then removed with the spoil.