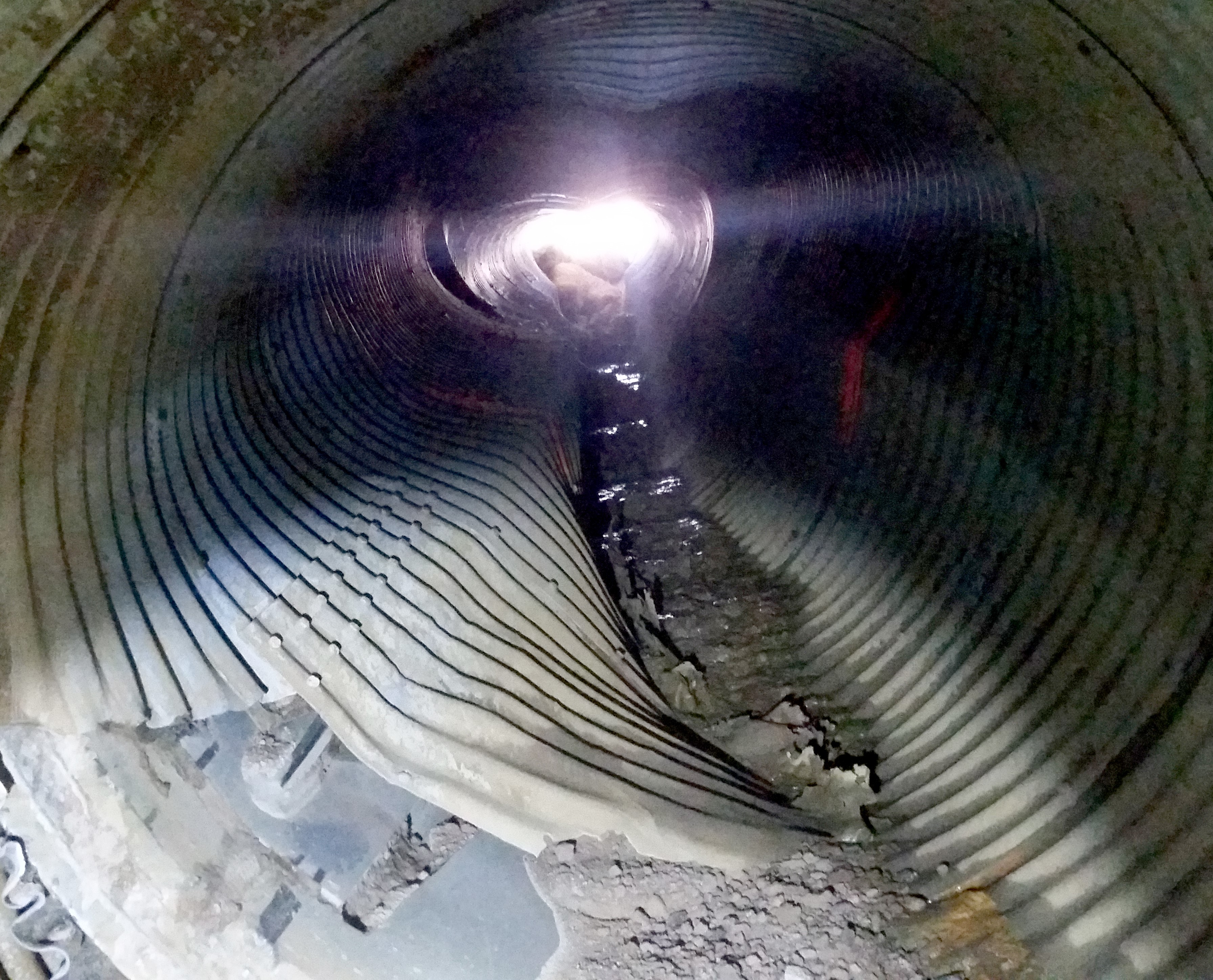 The Colorado Department of Transportation had ruled out excavation-based replacement, which would cause long-term traffic delays to a major U.S. tourist attraction, Rocky Mountain National Park.

A proposal to slipline the existing culverts was rejected for two reasons. While sliplining the failing culverts would provide a sound renovation, it would not meet the increased flow requirement to upsize the culverts from 48 to 60 inches. The second was fire mitigation policies. HDPE is combustible. It could diminish the road’s benefit as a fire break, allowing a wildfire to cross to the other side.

Soil reports were not available at the time Underground Infrastructure Technologies (UIT) took on the project, but UIT President Jeff Rumer suspected the main obstacle to a trenchless installation was that they would encounter solid granite. The site was at an elevation of 9,000 feet in the mountains 40 miles west of Denver. UIT could do the job, but Rumer believed he had a much more efficient way to install the pipe than as designed.

The existing culverts had been installed with drill-and-blast technique. The back fill around them at a depth of 20 feet consisted of fractured rock, wet sand and frozen soil. Rumer suggested making use of the same existing culvert paths, swallowing them with larger diameter pipe using a new variation of the pipe ramming method called “pipe crushing.”

The pipe crushing technique was developed with CMP specifically in mind. CMP is difficult to extract. Its corrugations mechanically lock into the compressed spoil between it and the interior wall of the larger casing. Attempts to push it out of the larger casing can result in an “accordion” effect, wedging it tighter still. Attempts to pull it out can mean taking out the CMP in small pieces that result when hooks or other fasteners tear free.

The pipe crushing technique makes extracting CMP from within larger casing easier by deforming the existing CMP into a cloverleaf-like shape. The first pipe driven over the CMP is a sacrificial “dummy” pipe equipped with interior, tapered blades. As the pipe ramming operation progresses, the blades crease and collapse the pipe.

Deforming the CMP reduces its circumference, unlocking and decompressing the spoil, significantly reducing drag. In some applications, a contractor can simply use a backhoe, excavator, boring machine or similar piece of equipment to push or pull the CMP out together with the spoil.

The DOT and the project’s general contractor initially turned Rumer’s alternative solution down, directing UIT to proceed with tunneling as specified at the new culvert locations. As predicted, UIT encountered solid granite a few feet into the attempt.

Rumer was convinced the pipe crushing technique would save the project time and money. He had been following refinements in the technique by HammerHead Trenchless of Lake Mills, Wisconsin, since the inception. HammerHead is a leading manufacturer and industry expert in trenchless tool design and applications. Its product lines cover pipe ramming and pipe bursting applications, cured-in-place pipe (CIPP) renovation and spot repair.

Rumer called upon his HammerHead connections, who agreed the Highway 36 culvert installation was a suitable candidate for a pipe crushing pilot project. HammerHead spokesman Alan Goodman said, “Jeff and UIT are outstanding trenchless industry experts, and we were eager to work with them on this.”

Industry education is also one of Rumer’s fortes. A graduate from the University of Michigan with a BS in Applied Engineering, Rumer has more than 25 years of experience in the civil construction tunneling and boring industry. He is a trenchless technologies committee member of the National Utility Contractors Association (NUCA), the leading trade association of the U.S. utility construction and excavation industry. He was NUCA Chairman for 2016-2017 and was the 2013 recipient of its most prestigious award, Ditchdigger of the Year. He also serves on the advisory board of Louisiana Tech University, taking part in curriculum development of its Trenchless Technology Center and advising them of emerging technologies and techniques.

Together UIT and HammerHead persuaded project stakeholders to let them demonstrate the pipe crushing process on two of the three replacement culverts. Length of the culverts were 120 feet and 150 feet.

Pipe ramming operations to install 60-inch steel pipe on center over the existing 48-inch CMP went as planned without complication. Cables attached to the blades travel with the crushing tool to the end of the run, putting them in place to be used for subsequent extraction.

Ramming operations went as planned. The first length of pipe installed was the crushing tool, a sacrificial 60-inch steel “dummy pipe” with long tapering plates of steel welded inside. Driven by a 24-inch HammerHead ramming tool powered by two 1,600 cfm compressors, the crushing pipe’s blade-like protrusions creased the CMP, progressively reducing its circumference into a smaller diameter cloverleaf-like shape. Deforming the CMP this way liberated the confined spoil, significantly reducing drag that would aid in its extraction.

Extraction in this pilot project was complicated by the type of fill. Cables that had been fastened to blades went with the pipe to the end of the run. The UIT crew attached the cables to an extraction tool that, Rumer said, “is basically is designed to operate like a pig.” In shorter runs or runs with less spoil, Rumer believed he could have extracted the CMP and spoil in a single pull. However, “The fill here was poorly graded, with oversized blocks of granite adding to the weight. And the job did not accommodate a machine capable of pulling that kind of weight through all at once.”

Since the 60-inch pipe permitted personnel entry, UIT abandoned the extraction tool to clean both installations out manually. Even so, Rumer said, crushing the pipe had served its purpose. The process increased the effectiveness of hooking directly into the CMP. The UIT crew could extract longer sections at a time, reducing project time with fewer trips in and out of the pipe. 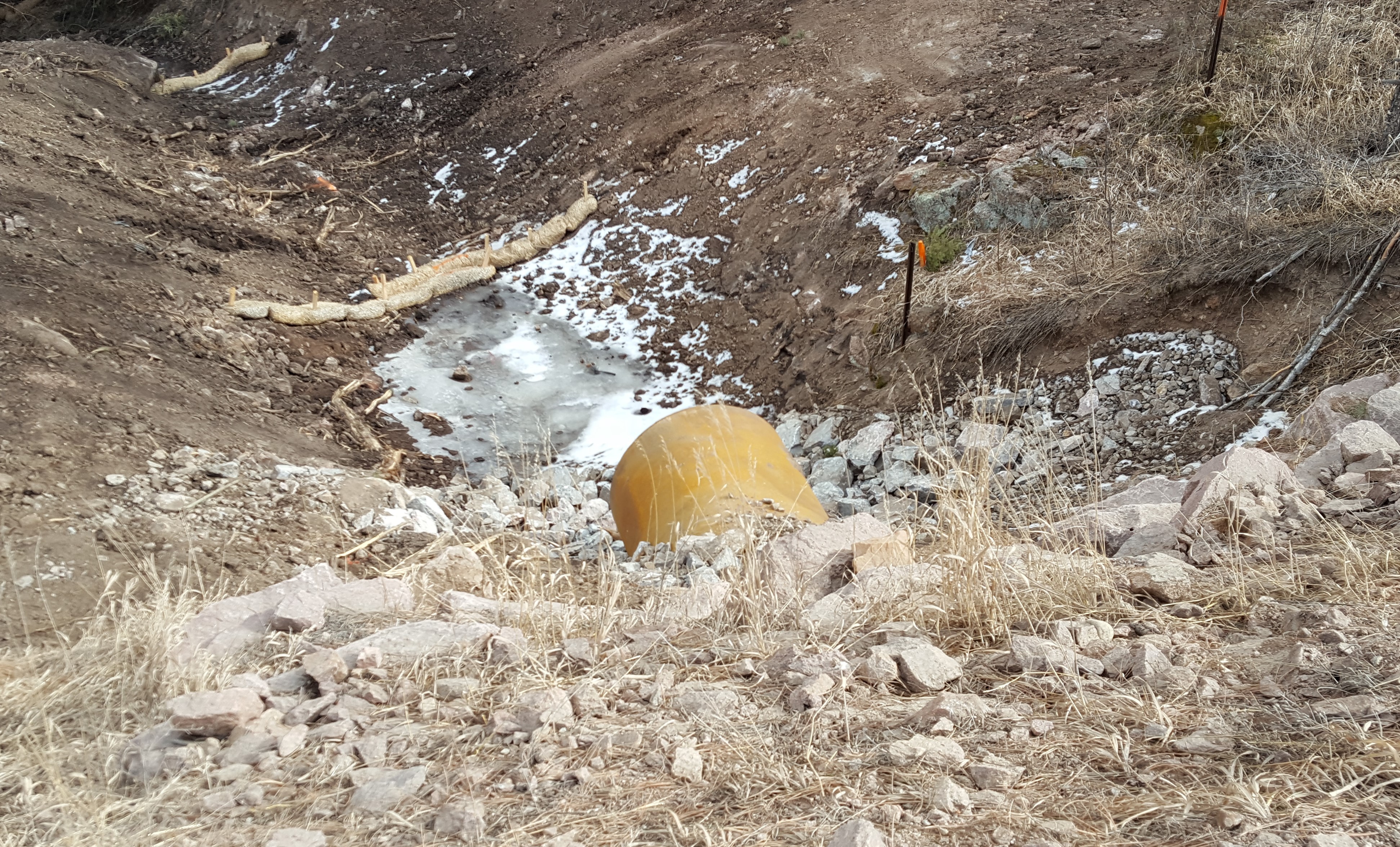 The savings to UIT’s customer by using the pipe crushing technique were substantial. Rumer said, “By our calculations, conventional tunneling methods would have taken six to eight months longer, with millions in additional cost.”

UIT will definitely use the technique again, Rumer said. “No way could this job have been completed this successfully without the new pipe crushing technology.”