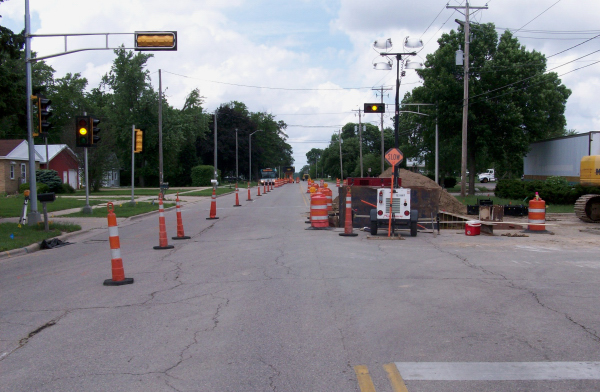 East Conde Street in Janesville, Wis., begins at Beloit Avenue and ends a few blocks later in an industrial park. It’s the only access to the businesses located there. Two of the companies, a vegetable processing plant and soft drink company, maintain steady schedules of truck traffic throughout the day. Shutting down East Conde during a business day to replace a sewer lying 19 feet beneath it would be a tremendous financial burden on these companies.

Nevertheless, a 660-foot section of 12-inch non-reinforced concrete sewer pipe that lay centered below East Conde Street needed to be replaced. Steve Sage, P.E., a Janesville Engineering Division senior engineer, said a failure in the pipe prompted a video inspection. The camera report showed that nearly a quarter of the sewer pipe’s bottom portion had disintegrated. Replacement to prevent any more collapses became an urgent priority.

Sage said he was confident that the pipe bursting replacement technique would be a good option. He recommended Janesville Public Works solicit trenchless solutions in addition to traditional open cut bids.

Janesville awarded the job to Speedway Sand & Gravel of Middleton, Wis., who would perform a 12-on-12-inch pull of fused HDPE pipe in a single pipe bursting run.

Speedway consulted Nate Hrabosky of HammerHead Technologies of Oconomowoc, Wis., who provided a HammerHead 15.75-inch concrete expander to run behind a pilot pulled by a HammerHead HB125 static bursting machine with a pulling force of up to 125 tons. 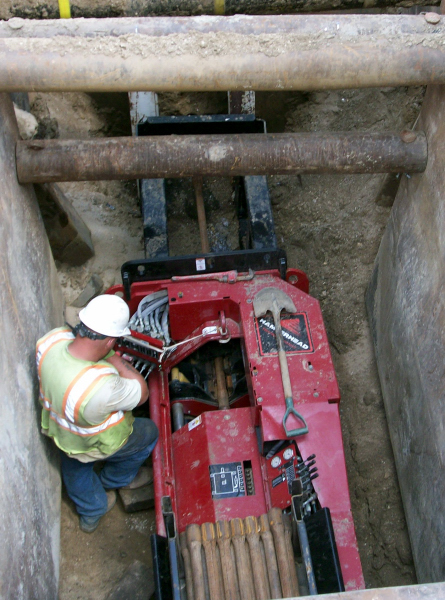 Troy Dominy of Speedway said a number of factors made this a challenging burst. First was its length in a Class A Project. The International Pipe Bursting Association recommends burst lengths of 350 to 400 feet. This run would be more than 50 percent longer. Second, the pipe lay at 15 feet deep. The entry and working pits needed to be excavated roughly 17 feet deep.

On this project Speedway used the static technique due to uncertainty about a 12-inch water main’s integrity. It was lying near the entrance manhole, perpendicular to and crossing the sewer line below it. Though pneumatic method might have worked, Dominy said he wanted to play it safe as possible. Any other job, he said, he would be comfortable with either technique. In fact, it occurred to him that one of the benefits of the pneumatic method was that a smaller pit might suffice for reception, perhaps using just the manhole itself.

The Static technique consists of paying out 3-meter sections of threaded rod from a working (or receiving) pit to the entry pit. In this case the expander and trailing HDPE replacement pipe were attached to the pull rod. Then the static bursting machine pulled the string through the existing pipe as the crew retrieved the pull rod one length at a time in the receiving pit.

In the pneumatic technique a percussive hammer drives the bursting heads. A cable is attached to the bursting assembly, but its duty is only to provide steady tension from a winch at the exit pit.

Both methods use a cone-shaped burst head to fracture pipe and shove aside the fragments as it progresses. The burst head, also called an “expander,” is always larger than the replacement pipe diameter. Having extra space around the pipe decreases friction of replacement pipe against the ground and existing pipe, which increases in proportion to the advancement of the replacement pipe. The formula HammerHead engineers used to calculate the optimum annulus in this case determined that a 15.75-inch burst head was appropriate for 12.75-inch O.D. HDPE replacement pipe.

Dominy believed the pull could have been made with the smaller HammerHead HB100: “But I was just more comfortable going with the extra tonnage, given our time frame.”

At 6 p.m. Friday night, May 31, East Conde Street and two lanes of the four-lane Beloit Avenue were closed. Crews began staging such things as the backfill, pull rods, and fused HDPE pipe along the road. A crew was assigned to each pit at the manholes: a 12-by-10-foot working pit for the static bursting machine and 45-by-6-foot entry pit for the fused HDPE, whose actual length was 670 feet to be trimmed after positioning for connection.

The city did not want to cut the active, high-pressure water main, so the machine pit crew installed a 12-foot-long trench box beneath the water main. Now the main rested on the end of this box. Then they set the pulling machine inside the box, under the pipe. When the machine was finally in place, the crew set a 10-foot box on top of the first and shored up the exposed parts of the pit with metal sheeting. The tight confines of the excavation made preparation of this pit the most difficult part of the entire project, Dominy said.

About 10 percent of the original 4-foot wide pipe trench had been dug in the existing sugar sand soil conditions and was difficult to retain during excavation of the insertion pit at the manhole in the intersection. The rest of the digging was in clay.

Work preparing the extraction and entry pits continued till about 1 a.m. The city required that Speedway provide a break from the activity for the nearby residents impacted by the project. 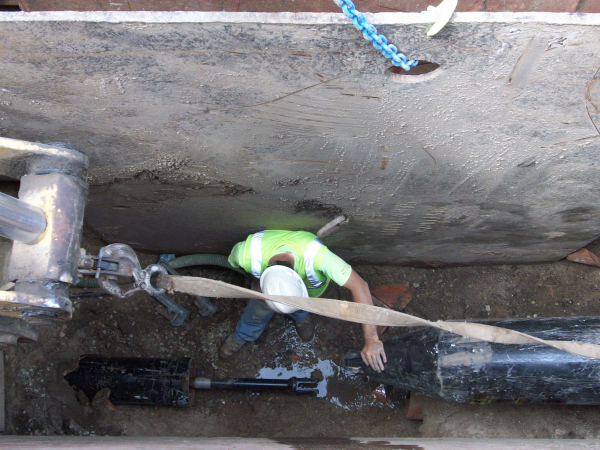 Work resumed at 6 a.m. Saturday. At times Speedway crews opened the street for limited traffic to and from the small Saturday shift at the vegetable processing plant. By 11 a.m. crews began running out pull rod from the static pulling machine. The burst began at 3:30 p.m. and was completed by 9:00 p.m.

Dominy said the pull went perfectly. He said that although he had wanted the extra confidence a 125-ton static bursting machine would provide, the pull at its peak required only about 50 tons. Most of the pull was accomplished with much less force.

While Speedway had also prepared an open cut bid, Dominy said it would have been much more challenging to dig this job. “We do use open cut technique. We do it all the time. But here I was a big fan of pipe bursting. Trenching this job, especially at this depth, we probably would have averaged only 150 feet a day, not including time at the manholes. It would have been really tough to accomplish in the given time frame.”

The 660-foot pull itself was almost anticlimactic, taking only five hours of the total project time. HammerHead had sent bursting expert Mark Maxwell to provide technical support as needed. As this was an emergency replacement job being performed at night with a rented machine, it was decided Maxwell would be the operator. Maxwell said, “They just needed to get the pipe in the ground, and I was more familiar with this particular piece of equipment. It’s pretty common for technicians to do that for a customer. Especially when it’s a single run like this.”

Maxwell left the job impressed with Speedway’s team, who are experienced in pipe bursting method. “It’s a pleasure to work with people who know what needs to be done.”

Even as the pull was being completed, Speedway’s crews were digging in to attach the laterals with connection kits consisting of a PVC hub, rubber sleeve, and stainless steel band set into the top of the new HDPE sewer line. Dominy said his crews “just dug down to the pipe, knocked off the concrete chips from the burst, cored a hole and made the connection.” He estimated each to take about 3.5 hours to complete.

Looking back, Sage said pipe bursting had saved the city about 20 percent of anticipated cost. Speedway Sand & Gravel crews impressed him by finishing the job both ahead of schedule and under budget.

Sage noted that Janesville’s sewers will continue to need attention as they age. When future projects present themselves, he will be able to use this project as further proof that pipe bursting is not only viable but a speedy, cost-effective alternative to replace additional pipe beneath Janesville’s city streets.