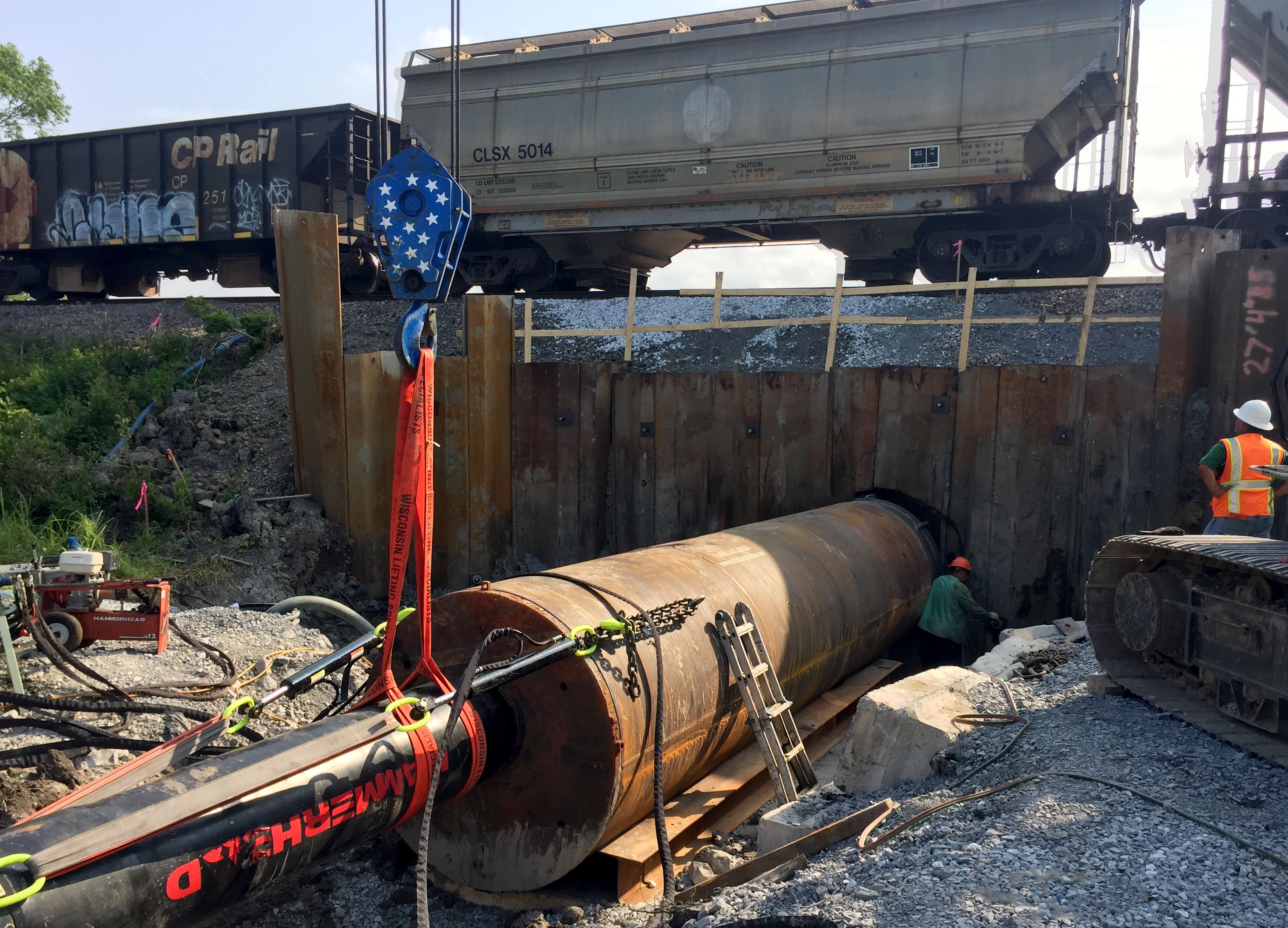 Although to date it’s officially listed as only the ninth costliest hurricane to make landfall in the U.S., in 2011 Irene caused at least 49 deaths and widespread destruction along a path spanning from first landfall in the Caribbean along the U.S. Eastern Coast well into Canada. By Aug. 29, Irene had made its way as far north and inland as Vermont. Even the White River Railway Bridge was victim to the storm, with one granite pier sinking more than 6 feet and threatening total bridge collapse. Track washouts west of White River Junction completely shut down Amtrak’s high-speed Vermonter rail service from Aug. 29 to Oct. 1.

Rail service has long since been restored, yet seven years after Irene the Vermont Agency of Transportation (V-Trans) continues bolstering railway infrastructure against future severe weather events of Irene’s caliber or greater. Two of its FEMA-funded rail system improvement projects in 2018 focused on ground stabilization and drainage upgrades near Ferrisburgh and New Haven.

V-Trans contracted Engineers Construction (ECI) to perform the scope of work for this project. Founded in 1965, the multi-division, family-owned contractor specializes in civil and full-service railroad construction, concrete construction, asphalt paving and trenchless pipe installation. It is an industry leader in steel-casing installation.

ECI’s ability to seamlessly coordinate deployment and integrated task performance of its five divisions, with a fleet of over 500 pieces of equipment and 175 dedicated personnel, assure its customers of highest-quality work at greatest value in complex and highly technical projects.

All work on these two contracts was performed by ECI teams. Tasks ranged from heavy civil construction to sheet piling, earth anchoring and extensive erosion prevention and sediment Control (EPSC). It included installation of one new, 100-foot-long culvert at New Haven and two replacement culverts, one 49 feet long and one 50 feet long, to upgrade flow capability near Ferrisburgh.

Tom Loyer, ECI Sr. Project Manager and head of its trenchless division, said open cut technique was out of the question for these projects. “Our rail and excavation crews could certainly do it but not between the scheduled trains. The busy line had to be kept running. This region has severely limited rerouting options.” 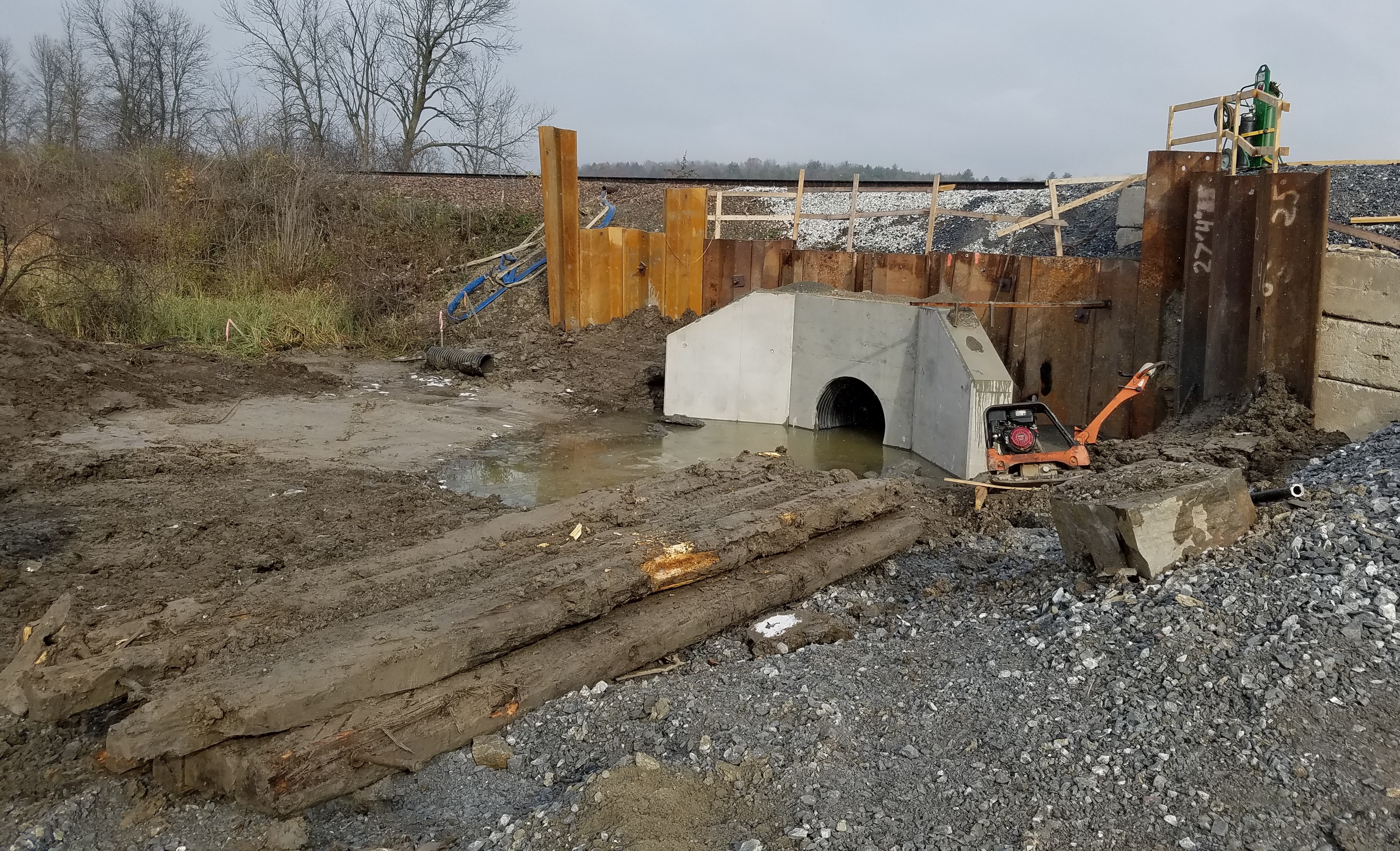 Loyer prefers auger-boring for railway casing installations to meet the projects’ typically tight tolerances for grade and azimuth. While the New Haven site gave the crew ample space for an auger boring setup, site restrictions for the Ferrisburgh contract were complicated by a shared boundary with environmentally protected wetlands. Elevation wasn’t a problem here, as the shallower culverts of this contract were just a few feet below the toe of the shoulder ballast. But the allowable worksite dimensions were too tight for an auger boring machine or construction of backing wall.

The site restrictions did allow for 40-foot working pits, adequate space to operate a medium-sized horizontal directional drilling (HDD) machine and a pipe ramming tool setup. “Combination pipe ramming and a guided boring method was an easy call on this job. We’re weren’t crowded then at all.”

Other ECI divisions worked on sheet piling at the two sites and on grouting up the existing, 100-year-old stone box culverts at Ferrisburgh. ECI’s trenchless crew began with the Ferrisburgh project. One pipe path was adjusted prior to installation operations to accommodate a ledge discovered during ECI’s preconstruction, exploratory probing.

The ECI equipment fleet represents all major manufacturers in the market. They purchased their largest hammer, a HammerHead 24-inch ramming tool used for this job, in 2012. Loyer’s personal experience with HammerHead equipment and support goes back 28 years or more. He and his brother, now deceased, founded Trenchless Technologies of New England. “Actually, I think we were one of the first in the country to offer pipe ramming.”

The team used one of ECI’s mid-sized Ditch Witch HDD machines to establish the grade and azimuth with 5-inch pipe. Once through the ground’s heavy clay conditions, they adapted a 24-inch Akkerman guided boring machine (GBM) weld-on reaming head for use centralizing ramming operations on the 5-inch pipe. The pipe then guided ramming operations as the they installed the 24-inch diameter, ½-inch wall steel pipe casing into the bore using a small ramming tool. The 24-inch casing served as the final “pilot pipe” to guide ramming of the 72-inch, grout-ported, 1-inch-wall, carbon steel casing.

“A 5-inch pipe, of course, won’t stand up to ramming operations on 72-inch casing. Since these were relatively short runs in conducive soil, we only needed to step up to 24-inch pipe. In longer runs and tougher soils with similar, sensitive grade requirements, we might go from 5- to 24-, and then step up again to 36- or even 42-inch pipe to drive a 72-inch casing. It all depends on the requirements and ground conditions of the job.”

Two 1,600 cfm Caterpillar compressors supplied power to the HammerHead 24-inch ramming tool. Each 20-foot length of 72-inch casing took a day to drive. Adding a section to the installation required two certified ECI welders and a full shift to make the joint.

To clean out the pipe the team used a 64-inch auger tool and skid steers. “That basically got the pipe so clean, we just handed out shovels and a hose to manually wash out the little that was left.”

The project plans had initially called for contact grouting of the 72-inch casing. When V-Trans came to inspect the installation, they found heavy clay was densely packed around the pipe with zero voids detected at the ports. Contract grouting requirements were waived.

The crew installed cross-members within the pipe to support the polymer-coated carrier prior to performing the project’s requirement for annular grouted fill.

Nor will the next Irene to come along reveal their inner workings. The carrier within the two-pass system has a rated service life of at least 100 years. 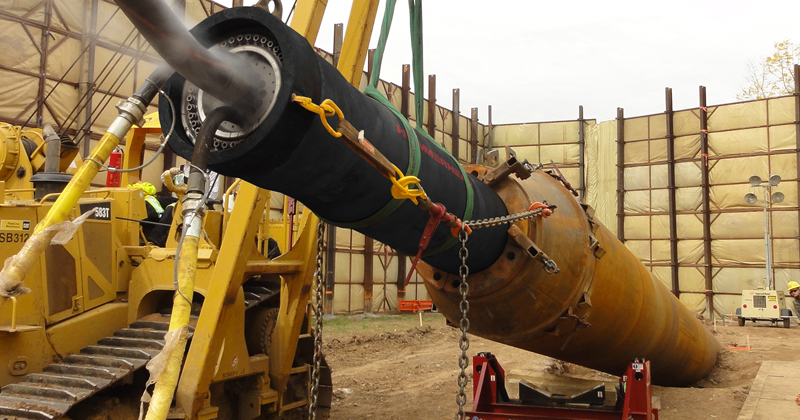